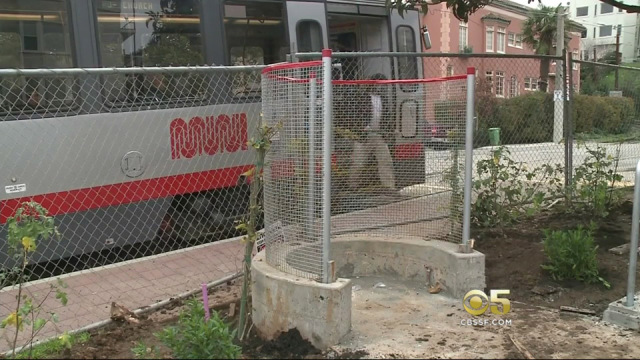 SAN FRANCISCO- A religious organization has filed a lawsuit against the city of San Francisco to remove an open-air urinal it calls unsanitary and indecent from a popular park.

The group says the urinal, which is out in the open and screened only with plants for privacy, "emanates offensive odors," ''has no hand-washing facilities" and "it's offensive to manners and morals."

The lawsuit further alleges that the facility installed in February discriminates against women and the disabled and exposes those who use it to "shame and embarrassment."

"The open-air urination hole violates the privacy of those who need to use the restroom but would be required to expose their bodies and suffer shame and degradation of urinating in public view," it says.

The City Attorney's office said in a statement that it will defend against the litigation and pointed out the 16-acre park is well-known for its "counter culture, immodest sunbathers, pot brownie vendors, spectacular city views, and famously irreverent 'Hunky Jesus' contest."

The office said residents advocated for the facility, called a "pissoir," to stop people from urinating on walls, bushes and sidewalks.

"If I had to predict the top 100 things in Dolores Park likely to offend these plaintiffs, I wouldn't have guessed that this would make the cut," City Attorney spokesman Matt Dorsey said in the statement.There have been several formal complaints against the urinal, reports CBS San Francisco. Last month, the Pacific Justice Institute, a conservative legal defense nonprofit, sent a cease-and-desist letter to the city about the urinal project, saying it violates the privacy rights of both users and those forced to watch them.

The urinal is part of a $20 million renovation plan that now has put more than two dozen toilets in Dolores Park along with other upgrades.

San Francisco has a long, sometimes creative, history of dealing with public urination. Last summer, the city painted nearly 30 walls with a repellant paint that makes urine spray back on the offender. In 2002, the city increased the possible fine for the crime up to $500, but that did little to deter the practice.