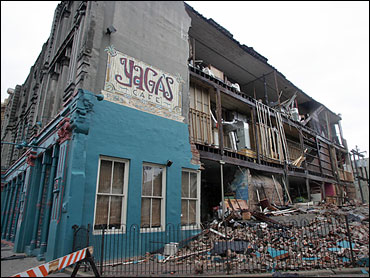 Hurricane Rita pummeled east Texas and the Louisiana coast Saturday, triggering floods and demolishing buildings, yet the dominant reaction was relief that the once-dreaded storm proved far less fierce and deadly than Katrina.

New Orleans, devastated by Katrina barely three weeks ago, endured a second straight day of new flooding that could seriously disrupt recovery plans. The Army Corps of Engineers said it would need at least two weeks to pump water from the most heavily flooded neighborhoods — notably the impoverished Lower Ninth Ward — after crews plug a series of levee breaches.

Meanwhile, President Bush declared a "major disaster" in Texas and authorities pleaded with the roughly 3 million evacuees not to hurry home too soon, fearing more chaos.

"Be patient, stay put," said Texas Gov. Rick Perry. "If you are in a safe place with food, water, bedding, you are better remaining there for the time being."

But CBS News correspondent Trish Regan reports that many evacuees, some in make-shift shelters with no beds, are

"We don't have no money or nothing. It's hard," said Ronda Jordan, who was trying to return home to Galveston.

Kroger, Walmart reverse mask policies due to Delta variant
CBS News has planned expanded coverage of Hurricane Rita this weekend. For details, click here.
In any other hurricane season, Rita might have seemed devastating. It knocked out power for than 1 million customers, sparked fires across the hurricane zone and swamped Louisiana shoreline towns with a 15-foot storm surge that required daring boat and helicopter rescues of hundreds of people.

But the new storm came in the wake of Hurricane Katrina, with its 1,000-plus death toll, cataclysmic flooding of New Orleans and staggering destruction in Mississippi. By contrast, Rita spared Houston, New Orleans and other major cities a direct hit, and by late Saturday evening, only one storm-related fatality had been reported — one person died in a tornado spawned by Rita in northern Mississippi.

"The damage is not as serious as we had expected it to be," said R. David Paulison, acting director of the Federal Emergency Management Agency. "The evacuations worked."

Though not as severe as Katrina, Rita's storm surge extended all the way up into neighborhoods 15 miles from the Gulf of Mexico, reports CBS News correspondent John Roberts.

Damage to the vital concentration of oil refineries along the coast appeared relatively light, although industry officials said it was too early to assess whether there would be an impact on oil prices. Valero Energy Corp. said its 255,000-barrel-per-day Port Arthur refinery sustained significant damage to two cooling towers and a flare stack, would need at least two weeks for repairs.

Rita roared ashore at 3:30 a.m. EDT close to the Texas-Louisiana border as a Category 3 hurricane with top winds of 120 mph and warnings of up to 25 inches of rain. By late Saturday, it was downgraded to a tropical depression with top sustained winds of 45 mph as it moved north of Shreveport, La.

Before it weakened, Rita showed its strength across a broad region between Houston and New Orleans.

In Beaumont, trees of all sizes and power lines were down, street signs were shredded, and one brick wall of an office building had collapsed. Said Dr. Gaylon Gonzalez, a surgeon spent the night at Christus Hospital St. Elizabeth as Rita arrived: "It sounded like a power washer hitting the windows."

The Texas Department of Transportation dispatched a 30-vehicle convoy from Beaumont to clear a debris-covered highway to the north toward Lufkin. Department spokesman Mike Cox said some of the vehicles would detour into the small town of Fred to check out reports that a nursing home still occupied by scores of patients had lost power.

Some of the worst flooding occurred along the Louisiana coast, where transformers exploded, roofs were torn off and trees uprooted by winds topping 100 mph. Floodwaters were nine feet deep near town of Abbeville; farther west in Cameron Parish, sheriff's deputies watched appliances and what appeared to be parts of homes swirling in the waters of the Intracoastal Waterway.

The region was largely evacuated ahead of Rita, but some residents stayed behind and were rescued by helicopter. Among them were a pregnant woman and her 4-year-old son stranded in Port Lafourche, a Gulf Coast outpost about 60 miles south of New Orleans.

"Most of the town was already under water from Katrina," said Coast Guard Lt. Roberto Torres, the pilot who airlifted the woman out. "And what wasn't got flooded by Rita."

Some New Orleans residents who had evacuated to Houston because of Katrina were forced to move again as Rita approached.

"We're tired of being pushed from place to place," said Cora Washington, 59, as she and her family sat on cots in Texas A&M University's basketball arena in College Station. "We want to try to go back to New Orleans and pick up the pieces."

About 3 million people had fled a 500-mile stretch of the Texas-Louisiana coast ahead of Rita. The mass exodus produced gridlock and heartbreak; a bus of evacuees caught fire south of Dallas while stick in traffic, killing as many as 24 nursing home residents.

Though Houston authorities urged residents not to rush home to a city lacking many essential services, inbound roads were already clogging Saturday afternoon. Most stores in Houston were closed, bank machines had no cash, and police were controlling the long lines at the few open gas stations.

As Rita's winds swept past, several fires broke out in and around Houston, including one in a two-story apartment building that damaged at least eight units. Several buildings were damaged or destroyed by fire in Galveston, and a blaze broke out before dawn at a shopping complex in Pasadena.

As the sun came up in downtown Beaumont, a port city of 114,000, the few people who stayed behind emerged to find some blown-out windows, damaged roofs, signs twisted and lying in the street and scattered downed trees. There was some standing water, but no significant flooding.

In Beaumont's nine-story Elegante Hotel, wind blew out massive windows in the lobby, bringing down a chandelier and ripping part of the roof off.

"We stayed in a stairwell most of the time," said Rainey Chretien, who works at the front desk. "I didn't think it was going to be this bad."

As the storm raged, the torches of oil refineries could be seen burning in the distance from downtown Beaumont. The facilities represent a quarter of the nation's oil refining capacity and business analysts said damage from Rita could send gas prices as high as $4 a gallon. Environmentalists warned of the risk of a toxic spill.

President Bush, mindful of criticism the federal government was slow to respond to Hurricane Katrina three weeks ago, visited the Texas emergency operations center in Austin on Saturday.

Like other officials, Bush urged citizens not to prematurely assume the danger was over.

"Even though the storm has passed the coastline, the situation is still dangerous because of potential flooding," he said. "People who are safe now ought to remain in safe conditions."

Wal-Mart Stores Inc., the nation's largest retailer, said Rita forced the closure of 150 of its facilities in Texas and Louisiana. About half of them were without power early Saturday. Home Depot Inc. said 46 of its stores were closed, including 41 in the Houston market.

More than 675,000 CenterPoint Energy customers in Texas were without power, company spokeswoman Patricia Frank said. Entergy spokesman Chanel Lagarde said about 250,000 of its Texas customers and nearly 300,000 of its Louisiana customers lost power because of Rita.