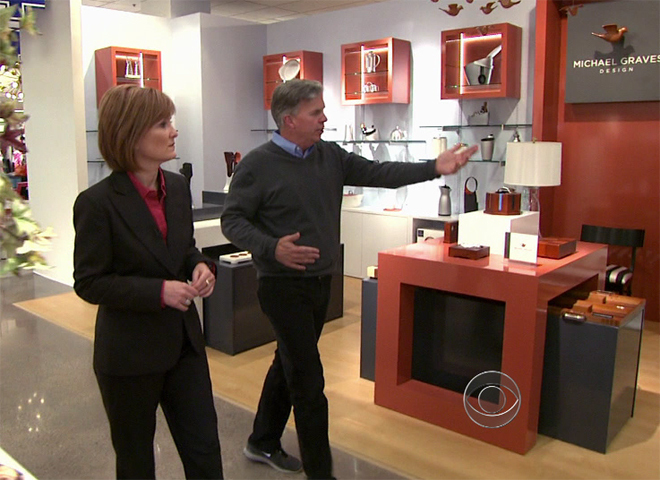 (CBS News) So, WHAT'S IN STORE for shoppers this holiday season? Lots and lots of choices for one thing, including a choice of what sort of STORE you'd like to buy from. And these days one type of store in particular is struggling to hold its own. Our Sunday Morning Cover Story is reported now by Anna Werner:

It's the season for buying.

This holiday season's sales are expected to ring in at nearly $600 billion, as shoppers flood online giants like Amazon, discount stores like Costco, and big box stores like Wal-Mart

Where do fewer people seem to be getting their gifts? Department stores.

It's a far cry from the days of "Miracle on 34th Street," where shoppers flocked to Macy's for their holiday needs.

Lisicky can rattle off the names of department stores that have gone out of business in the past 50 years - Marshall Field's, Gimbel's, Wanamaker's.

Just look at the list of the big merchants of the mid-sixties. Only ONE of the stores - Macy's - still exists today.

"The era of the department store has passed and I don't know that it's ever coming back," he said.

Which brings us to JC Penney: The 110-year-old merchandiser is struggling to find its way.

His assignment: To make a store founded in Wyoming by James Cash Penney back in 1902 a shopping destination all over again.

"To earn loyalty you've got to do more than help them buy. You've got to become a part of their life."

So for the past year, Johnson has been working to transform all 1,100 stores in 50 states 21st century state-of-the-art store he's calling "JCP."

"We're here today in the future JCP," Johnson said. "We're going to transition JC Penney from a promotional department, or what we call a specialty department store, which is an entirely new way to shop."

His plan, as he showed us in the prototype store in Dallas, is to entice customers with "shops" within his JCP stores, creating a mini-mall in each store.

The store contains, not "aisles," but "streets." "It's a place to be, and it becomes the new navigation path for shopping, because in the age of the Internet, you've got to more than be a place to buy. You've got to be a place people love to be. And so the street allows you to kind of do things that you couldn't do elsewhere."

So while a woman shops for the latest fashions, her husband can be catching up on the scores at the iPad table. "I feel like I'm IN the Apple Store," said Werner.

The kids can head over to the Lego station. Afterwards, they might visit the in-store candy shop for a treat.

Throughout, they'll see consistent prices for merchandise, because Johnson banished the coupons JC Penney customers relied on for years.

"The reason we're not using coupons is we would have to artificially inflate the prices 30, 40 percent to offer the illusion of values through coupon," Johnson explained. "That's a fundamental choice. We could either raise our prices and have coupons, or price it low every day and try to deliver even more value periodically. We think that's a better way to run a business."

Johnson may believe it's better, but without coupons, sales at the new JCP stores dropped 20 percent in the first three months, and have continued to decline.

And JCP's stock price has dropped by half this year alone.

"JC Penney is a store of necessities, it's a store of sales," said Lisicky. "You can't really dress up a store that has really traditionally played a basic role and try to change it almost overnight."

So who DOES have a recipe for department-store success?

Welcome to Nordstrom, where the family name is still on the door, and a family member - Erik Nordstrom - is President of stores.

Werner asked, "Why do you think Nordstrom has been successful when some other department store chains have faltered?"

"I think we're fortunate in what's been built before us," replied Erik Nordstrom. "Being customer-centric and really having that focus has always been there. And that's helped a lot."

Nordstrom's customer focus is legendary. There's a piano player, a concierge at the front door ready to help with requests, and one rule for employees dealing with customers: Use your best judgment.

"People talk a lot about Nordstrom's return policy, which is what?" asked Werner.

"We don't have a return policy," he laughed. "I don't know how to create a return policy that would take care of every possible situation. So we default to not having a policy, and really just take the approach of doing the right thing."

"The shoe department's a good example of use of technology here," said Erik Nordstrom. "Those handheld devices have real-time access to our complete inventory. So, 117 stores, our online warehouse in Iowa.

"In my day, when I sold shoes, great service was, if you didn't have the size, you'd pick up the phone and call other stores. And that doesn't pass these days because we want to know now."

Now, what began as a Seattle shoe store in 1901, with first-day receipts totaling $12.50, has become a specialty department store chain with stores in 31 states across the country.

So what does Erik Nordstrom think of the task in front of JCP's Ron Johnson?

"I think one of his challenges is change - really taking a store and really changing it in many fundamental ways. That's hard. That's something we haven't had to do," Nordstrom said.

Johnson remains unfazed. He believes his strategies will make his department stores as popular as Apple - and he has something else he'll need, too: Confidence.

"Do you ever stop smiling?" Werner laughed.

"Yeah. I guess!" he replied. "I think innovation's really hard. At the same time it's very energizing. And it's so important that we invent the future and we move forward."

The Beatles, by the numbers