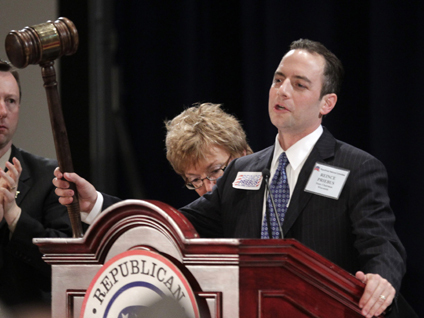 NATIONAL HARBOR, Md. - The Republican Party will face significant challenges in the 2012 election cycle: A geared-up Democratic electorate excited to see President Obama back on the ballot, a rowdy and somewhat unpredictable Tea Party base, funds flowing through multiple outside organizations. On top of all that, the Republican National Committee must deal with its splintered membership and more than $20 million in debt.

New RNC Chairman Reince Priebus today acknowledged as much after his fellow committee members chose him to put him at the helm of the organization.

"We recognize that the Democrats have taken this country on the wrong path, and it isn't going to be easy or glamorous, but together we must lead," he said.

Priebus, a 38-year-old lawyer who served as chairman of the Wisconsin GOP, said he plans to keep his head down and get to work. That means restructuring the RNC's financial operation, hiring a top-notch staff, improving the lines of communication with state parties and -- perhaps most importantly -- restoring the faith of the party's donors.

"Together we can defeat Barack Obama in 2012, together, unified as a committee," Priebus said.

The RNC chose to elect Priebus as chairman today over his successor, Michael Steele, and three other candidates.

Steele's two-year term as chairman generated controversy within the RNC and drove some of the GOP's top donors to outside organizations, like the Karl Rove-affiliated American Crossroads.

That group and other conservatives, however, expressed optimism that the RNC would bounce back as a strong organization under Priebus' leadership. "Over the next two years, no single institution is more crucial in the American center-right movement than a strategically smart and fiscally sound Republican National Committee, and members of the committee could not have chosen a better leader than Priebus," American Crossroads president Steven Law said.