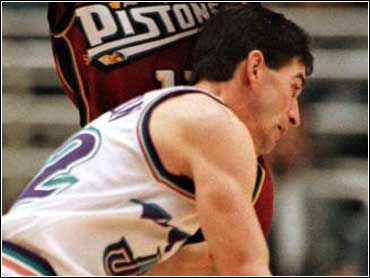 The official play-by-play report was more accurate than the officiating crew. No doubt the Utah Jazz caught a huge break.

Karl Malone scored 33 points, including the game-winner on a 20-foot jumper with 47.4 seconds remaining, as the Utah Jazz beat the Detroit Pistons 91-87 on Saturday.

Detroit went scoreless on its last four possessions but the Jazz stole a victory because of a wild and confusing finish that had Pistons coach Alvin Gentry yelling and chasing the referees as they left the court.

With the Jazz nursing an 88-87 lead, Bryon Russell's late 3-point attempt appeared to come after the shot clock had expired and with 3.8 seconds remaining on the game clock.

In the official statistics handed out after the game, the time elapsed between Utah's rebound of Grant Hill's errant 19-footer and Russell's 3-point try was listed at 24.9 seconds.

"Cheated is a strong word," the fuming Gentry said. "They (referees) didn't make a call that should've been made. I don't think they deliberately did it, but I think it was an obvious 24-second violation."

Even Russell couldn't make a strong case for his shot.

No whistle was blown when the shot clock ran down.

"Do you want the truth or the easy answer?" Utah center Olden Polynice said. "I'm not so sure Bryon got the shot off in time. On the other hand, it's a win for us and I'm going to take it."

Detroit should have had possession with 3.8 seconds left, bu the ball bounced long off the rim and ended up in the hands of Jeff Hornacek, who made a 3-pointer at the buzzer.

"You have to have a little luck in that situation," Jazz coach Jerry Sloan said.

As Gentry ran to the scorer's bench to argue that the Pistons should get the ball, confetti fell from the roof, dancers rushed onto the floor and the officials headed for their dressing room.

The crew of Joe Forte, Hank Armstrong and David Jones paid no attention to Gentry, who indicated his next appeal would go through the NBA's director of officiating, Rod Thorn.

"If I complain, I'm going to get fined," Gentry said. "Maybe Rod can look at it on tape and understand that an opportunity for us to win the game was taken away because they didn't make the call."

The Detroit players stood stunned below the Utah basket and even Jazz players milled about, apparently believing the clock would be reset and they'd need to make one more defensive stand.

"Stuff like that happens," Detroit's Terry Mills said. "You've just got to go on about it. This is not the NFL, where you can go to the booth and take a look in there to figure out what's happening."

Malone, who had 13 rebounds, hit two free throws with 1:58 on the clock to pull the Jazz within 87-86. And with Mills smothering him, Malone put Utah ahead with the baseline jumper.

John Stockton scored 12 for Utah and Russell had 14.

Hill came in averaging 27 points a game but he struggled, scoring 15 points on 7-of-22 shooting. He missed a chance to give Detroit the lead when his 19-footer with 27.8 seconds left was off the mark.

Lindsey Hunter was 5-of-7 from 3-point range and scored 24 points to lead the Pistons, while Jerry Stackhouse scored 21 and Mills had 12.

Utah coasted through the first 45 minutes, then in the last 2:44 tapped into a well of passion that largely has gone unused this season.

The Pistons led 87-82 with 3:28 to play after two free throws by Stackhouse. Russell put up an airball on a 3-pointer and Utah seemed headed for its ninth loss in 28 home games.

But the crowd got into it, and the lift seemed to spur the Jazz defensively.

Utah had a 43-29 lead with 6:31 remaining before halftime, but the Pistons warmed up through the second quarter and closed the period with an 11-2 run that tied it 48-48 at the break.

A sense of urgency settled over the Delta Center in the third, but Hunter silenced the restless fans by scoring 13 points. He hit three 3-pointers in the period, helping the Pistons lead by as much as 73-66.