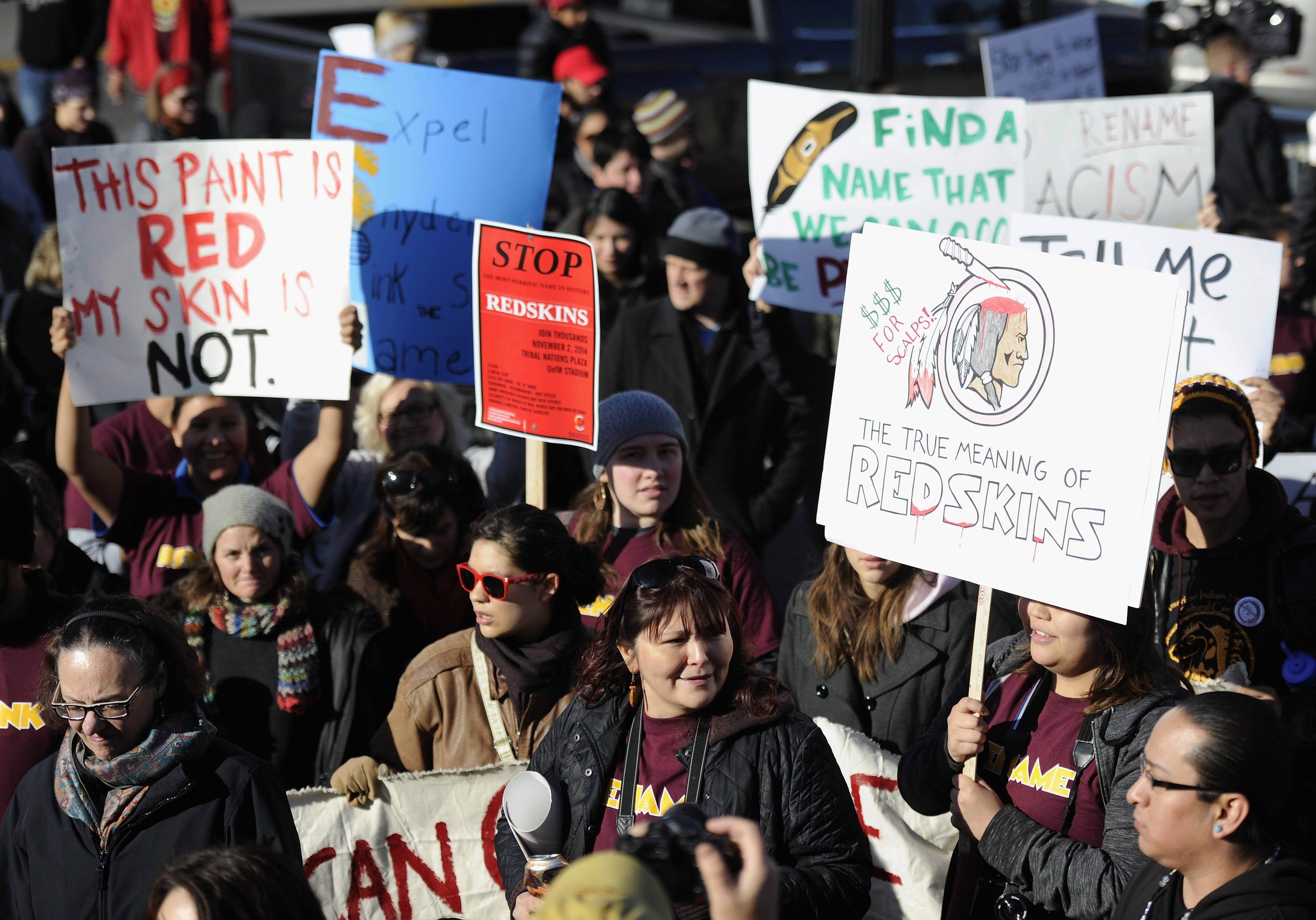 MINNEAPOLIS -- The action at the Redskins-Vikings game started Sunday morning outside the stadium in Minnesota, as a crowd estimated by organizers around 5,000 rallied against Washington's divisive nickname.

Meanwhile, a federal judge seems to think Native Americans offended by the Redskins team name are properly being sued by the NFL franchise.

The event began with a march through the University of Minnesota campus to TCF Bank Stadium, where Native American leaders, local politicians, former sports stars and other speakers voiced their disdain for Redskins owner Dan Snyder and his refusal to change the nickname they've derided as derogatory and racist.

With many of the attendees wearing colorful, traditional Native American clothing and more holding signs, the gathering was by far the stiffest resistance for a Redskins road game and the latest push in a nationwide campaign that has cranked up over the last year. Some people wore burgundy T-shirts with gold lettering, mimicking the team's logo with the words "Rethink" and "Rename" instead of Redskins.

"We're not mascots!" said former Vikings strong safety Joey Browner, one of 29 speakers who took the microphone on a lawn just steps from the stadium entrances.

Browner, who is part Native American, wore a black Vikings cap with a feather sticking up out of it.

"As a former player I feel really sad right now. ... This is still standing in front of us," said Browner, a six-time Pro Bowl pick, who called the nickname a "bullying tactic."

The university coordinated logistics for the march and rally and organized programs on campus all week for awareness, discussion and education related to the nickname issue. One of the many institutions to call for a riddance of the Redskins name, the university, lacked the legal or contractual authority under the stadium use agreement with the Vikings to prevent the Redskins from playing there.

The university pressed the Vikings to remove references to the nickname and logo during the game, but the team deferred to NFL policy.

The Vikings have said they've recognized the sensitivity of the issue and have maintained "ongoing and respectful dialogue" on the matter with Minnesota's significant Native American communities, citing "strong and positive" relationships with those groups.

"We respect and support our local community voices having an opportunity to be heard on this issue," the Vikings said in a statement earlier this week.

The NFL didn't immediately respond for comment on the protest. Commissioner Roger Goodell said earlier this year the nickname has been "presented in a way that honors Native Americans."

According to organizer Lonny Leitner, a pro-Redskins rally of about 400 people, mostly Native Americans, also took place on campus a couple of blocks away. Signs like "Native and proud to be a Redskin" were present.

According to results of an Associated Press-GfK poll last January, Snyder has support from the majority of the public. Among adults surveyed, 83 percent said the Redskins should not have to change their nickname.

The two-hour series of speeches was a peaceful gathering, including folk music and Native American dancers.

As the rally got going, a group paraded along the sidewalk between the stadium and the stage, chanting: "Hey, hey, ho, ho, this racist name has got to go!"

On Friday, Judge Gerald Bruce Lee suggested during a hearing that it would be unprecedented to dismiss the team's lawsuit against five Native Americans who complained about the name to the U.S. Patent and Trademark Office.

A trademark office board decided in June to cancel some of the Redskins' trademarks, citing federal regulations against protecting words and images that are disparaging or offensive.

The team could have challenged the ruling in appellate court in Washington, but sought help instead in a venue that gives it more options, by going to a trial court to sue the Native Americans who complained in the first place.

The team has used the Redskins name since 1933, and has asked the judge to reverse the trademark board's removal of protections of six trademarks the team registered between 1967 and 1990. The team argues that the name is not offensive, and that canceling its trademarks would violate its free speech rights and take its property without compensation.

A lawyer for the Native Americans, Jesse Witten, argued that his clients should be left out of the dispute and that the lawsuit against them should be dismissed. But team attorney Robert Raskopf said Amanda Blackhorse and the other defendants belong in court because they're the ones who filed the petition.

The judge seemed to agree and said he would issue a written ruling at a later date.

The team's trademark protection remains in place while the issue makes its way through the court system, and the trademark board's ruling does not apply to the team's current logo, which includes an American Indian head in profile.

Just losing trademark protections under the current ruling could cost the team tens of millions of dollars per year.

CBS News correspondent Jan Crawford reported that the legal battle could take years and even if the team eventually lost, trademark law experts say it has other legal avenues to keep people from selling unlicensed merchandise.

"I would not take this as a green light to go out there and start printing fake Redskins jerseys and selling them," trademark attorney Howard Hogan said.