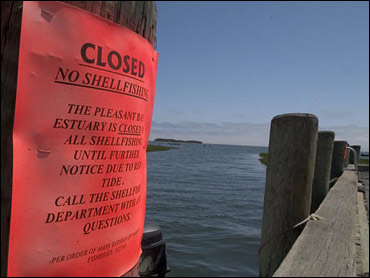 One of New England's worst red tides in decades expanded southward this week, rounding Cape Cod and forcing some of the region's most prolific shellfish beds to close.

About half the state's shellfish beds have been closed to shellfishermen since the toxic algae bloom appeared in waters off Maine last month and began spreading southward with little sign of abating.

It's the worst red tide to hit Massachusetts since 1972, when the state enacted a blanket closure of all shellfish beds, said Don Anderson, a red tide expert at the Woods Hole Oceanographic Institution.

The algae that causes red tides off New England's coast is not the same as that growing in the waters off southern states like Florida, causing noxious fumes, shutting down beaches and poisoning sea life.

Scientists say the northern algae contaminates only shellfish, making them unsafe for animals and humans to eat. Swimmers, fish and popular seafood such as lobster or shrimp are not affected. Scallops also are not affected because people don't eat the part that absorbs the poison.

Anderson said shellfish that reach market are safe because testing standards are rigorous.

But retailers and shellfishermen say prices could rise if local beds are shut down much longer and the state's shellfish industry, with an annual wholesale value of about $24 million (euro19.5 million), sees its catch drop.

The toxic algae, called Alexandrium, is called red tide because it colors the water a rusty color at extremely high concentrations, Anderson said. Each year, a bloom of the algae moves from the Gulf of Maine to Cape Ann, off Boston's North Shore.

Usually, the wind isn't right to push it westward into Massachusetts Bay, but this year, strong east and northeast winds, including from two May nor'easters, blew in a particularly heavy algae bloom that flourished in the bay's warmer waters.