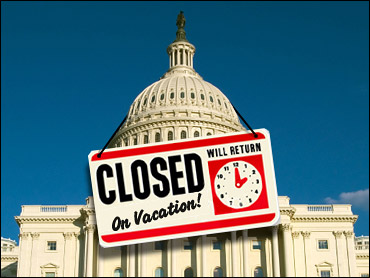 (CBS)
The House and Senate chambers are empty. Most congressional staffers are leaving at the civilized 5 o' clock hour. And the Capitol is filled with big groups of tourists in matching t-shirts, disappointed that they're not seeing any lawmakers or floor action.

It must be recess.

Vince Burke traveled to Washington from Arizona with his wife, Joycelee and their two kids, Keara and Nathan. They brought the kids to the Capitol this morning hoping to witness lawmakers in action, but found out Congress was out of session just steps too late – they were already inside. The family decided to make the best of it and took in the art and architecture. They even waited patiently to get into the House Gallery to see the empty chamber. On their way out Mr. Burke admitted it was a bit disappointing.

"You get one shot and that's it," he said. "This is the high season for tourists coming through. You'd think they'd be here."

Many Americans scrunch their nose at the idea that elected officials take "recess." After all, what are their tax dollars paying for?

The reality is that lawmakers usually take the time to return to their states or districts for important face time with constituents. They visit schools and factories and speak at Rotary Club lunches, and cut ribbons at grand openings. Going home is important for lawmakers to prove that they haven't gone "too Washington." And, on the House calendar, these times are technically called a "District Work Period."

For congressional staffers and journalists left behind, recess is a time to catch up. Time for much-needed research, time to work on feature stories and time to just catch your breath. There's also finally a chance for congressional staffers and journalists to meet for coffees and lunches to talk about news coming down the pike.

Nick Simpson, press secretary for House Minority Whip Roy Blunt, says the pace when Congress is in session would be hard to keep going all year round. And, what's more, the boss would never get to see people in their district. When lawmakers are in town, Simpson leaves at 7 p.m. on a light work day. During recess, he says: "I actually get to leave when it's still light out!"

Jodi Breisler, a radio reporter at Capitol News Connection with PRI, told CBS News that the best part of recess is that you finally get to think and get caught up. "I'm setting up interviews, I'm doing production and getting ... my Marantz (radio equipment) fixed," she says.

Breisler also admits that there is the added bonus of Capitol Hill happy hours, wearing sundresses, and being surrounded by people in jeans instead of the usual Washington power suits.

Of course, there comes a point at the end of every recess when most people get the itch for the daily deadlines and general flurry of activity that's expected on Capitol Hill.

Breisler says there are times at the end of a recess when she gets a bit antsy. "I start to feel like I should be covering something important," she says. "I should be in the middle of things."

As for the Burke family, the kids nodded enthusiastically when asked if seeing the House chamber was still worth it. Mr. Burke agreed. "At least when they see C-SPAN now they'll know they were there."