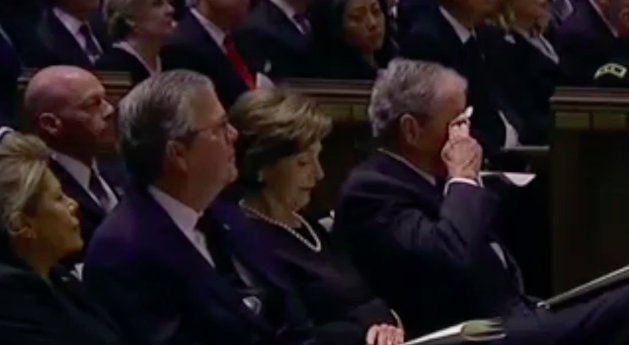 Mr. Bush, sitting next to wife Laura Bush, was seen wiping his eyes with a tissue during the heartfelt song.

The Kennedy Center honoree became emotional herself during the performance at St. Martin's Episcopal Church in Houston, Texas.

McEntire tweeted after her performance, calling the late president a "great friend and leader."

"It was an honor and privilege to sing at President George H.W. Bush's funeral this morning," the star wrote on Twitter, "I will never forget the time we shared together."

McEntire posted multiple photos of herself and the former president, with whom she had a friendship spanning years, on Instagram prior to the performance.

The singer used the hashtags #greatpresident and #greatfriend in all of the posts.

Following the service, the casket traveled by train to his final resting place at his presidential library at Texas A&M University, in College Station, Texas.