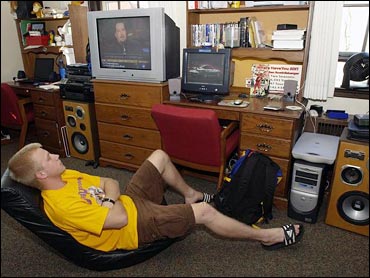 In Steve Leslie's dorm room at Miami University, there are bunk beds, posters of Led Zeppelin and the Simpsons, and an inflatable palm tree.

There's also a plug in every outlet. To be exact, 20 plugs sprout from the walls, two connected to power strips.

"I just keep adding stuff," said Leslie, 20, a junior from nearby Amelia who shares the room with another student. "I fill up my car and my dad's truck. Some of the bigger stuff, like the speakers, have to wait for the second trip."

Today's collegians are a generation who get their "intellectual oxygen" from cyberspace, said Paul Saffo of the Menlo Park, Calif.-based Institute for the Future. "The most important resource is electrons," he said.

They are also a generation raised on abundant electronics.

And so colleges are having no choice but to spend hundreds of thousands of dollars to upgrade electrical systems. Often, the upgrade costs are getting passed on to parents and students in the form of higher fees.

"It looks like Circuit City in some of those rooms," said Dan Bertsos, director of residence services at Wright State University near Dayton.

"What's happening today on college campuses is as we renovate buildings we are having to double or triple the electrical service to student rooms," Bertsos said. "Instead of having five or 10 amps to a room, you've got 20 or 30."

New and renovated dorms at Texas Christian University in Fort Worth are being wired to handle the increasing load.

"Kids used to come to college with an AM radio and an electric razor. Now they arrive with every electronic device there is," said Roger Fisher, director of residential services. "They come to campus in a U-Haul, and Dad follows in a Suburban."

The average freshman at Miami University takes 18 appliances to campus, according to a March survey by the school.

As part of a $7 million renovation of one dorm, Ogden Hall, the university spent $212,548 in 2000 to add building substations, electrical distribution panels and electrical outlets. The 7,000 students who live on campus pay an extra $100 a year in housing fees to cover the renovation costs.

"These days the students' lives are quite changed. They need more appliances," said Takashi Kawai, a 64-year-old Dayton-area man whose son lives in a dorm at Miami. Kawai, who helps pay for the schooling, said he can understand increasing fees if the rooms were expanded but not for simply expanding electrical capacity.

In a renovation a few years ago, Wright State doubled to four the number of electrical outlets in each of the 162 rooms at Hamilton Hall, increased the number of circuit breakers, installed new electrical-switch gear and rewired fuse boxes and student rooms. The cost was about $500,000, or $1,000 per student.

At Penn State University, electrical consumption in October was 33 million kilowatt hours, up from 27 million in October 1996. The school's electric bill is about $1 million a month. Paul Ruskin, with the university's physical-plant office, said power use by the 13,000 student residents contributed to the increase.

"It definitely adds up," he said.

But some officials say higher energy costs, campus expansions, lighting and the addition of computer labs and other energy-eating facilities are more to blame for increased power demand than student appliances.

Andrew Matthews, of the Association of College and University Housing Officers-International, said many dorms were built in the 1950s and 1960s and don't have the electrical capacity for power-dependent students.

The higher amp load has some schools setting limits and conserving.

The University of Dayton had to stop installing air conditioners in the dorm rooms of students who requested them for such things as allergies and asthma. Craig Schmitt, executive director of residential services, said the school will be able to accommodate those students next fall in a new, air-conditioned dorm.

Miami University has been replacing incandescent lights around campus with more efficient fluorescent ones.

But conservation alone is oftentimes not enough.

Maryville College in Maryville, Tenn., decided to tear down one residence hall last year and build a new dorm at a cost of $7 million.

"If too many women turned on their hair dryers in the morning, the circuit breakers would blow. That was happening daily," said Bill Seymour, vice president and dean of students.