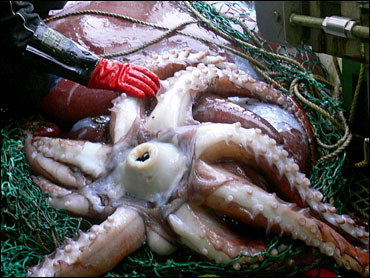 A New Zealand fishing crew has caught an adult colossal squid, a sea creature with eyes as big as dinner plates and razor-sharp hooks on its tentacles, an official said Thursday.

The fishermen were catching Patagonian toothfish south of New Zealand "and the squid was eating a hooked toothfish when it was hauled from the deep," he said.

Colossal squid, known by the scientific name Mesonychoteuthis hamiltoni, are estimated to grow up to 46 feet long and have long been one of the most mysterious creatures of the deep ocean.

Experts have not yet examined the squid, but if original estimates are correct it is about 330 pounds heavier than the next biggest specimen ever found.

The first specimen of a colossal squid, a 330-pound immature female, was caught on the surface in the Ross Sea near the Antarctic coast in April 2004.

Steve O'Shea, a squid expert at the Auckland University of Technology, said the latest specimen eclipsed that find and scientists would be very excited.

"I can assure you that this is going to draw phenomenal interest. It is truly amazing," he said.

If calamari rings were made from the squid they would be the size of tractor tires, he added.

The animal can move through the water to a depth of 6,500 feet and is extremely active and an aggressive killer, he said.

The frozen squid is to be transported to New Zealand's national museum, Te Papa, in the capital, Wellington, to be preserved for scientific study.

Marine scientists "will be very interested in this amazing creature as it adds immeasurably to our understanding of the marine environment," Anderton said.

Colossal squid are found in Antarctic waters and are not related to giant squid (Architeuthis species) found around the coast of New Zealand. Giant squid grow up to 39 feet, but are not as heavy.