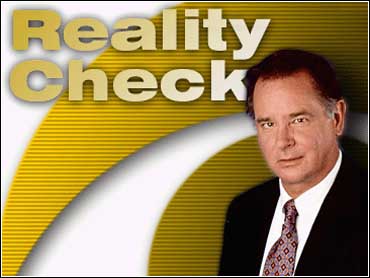 In this Reality Check, CBS News Correspondent Eric Engberg blows the lid off the Bradley-Gore negative campaigning scam by showing what it really takes to get into the gutter.

Al Gore was mad as hell and not taking it anymore. He looked around for a referee to call foul. The "personal vilification" being heaped on him by Bill Bradley was more than any candidate should be forced to endure. It was nothing more or less, he asserted, than "negative politics." He even imported an amen duet of Democratic party heavies - Sen. Tom Daschle and House Majority leader Richard Gephardt - to publicly fret over the "sharp negative turn" of Bradley's campaign.

Bill Bradley, who was only mad as heck in Iowa, was now also mad as hell. "Attack, attack, attack every day," he lectured Gore during one of their New Hampshire debates. "You're the elephant of negative advertising."

In this Democratic tiff between two polite Ivy Leaguers long known for their lack of bellicosity and wonk-ish approach to government, we are seeing a first in modern politics: "Tactical Whining over Unthrown Mud." In the name of winning undecided and independent voters, both of them seem to be trying to make "negative politics" more of an issue than the actual tone and substance of the campaign rhetoric deserves.


"Negative campaigning" has been a useful term of art for 20 years, and we should not let it be cheapened. We risk confusing future generations of aficionados of Steel Cage Wrestling/Politics. We risk debasing the traditions of Willie Horton and Joe McCarthy. Reality Check to the rescue. Here is a set of definitions and terms to judge the distinctions between a tough but unremarkable campaign tussle and below-the-belt, crawl-in-the-sewer, ear-biting, sneaky "negative" politics.

1. Negative campaigning is almost always done through advertising, not speeches or public pronouncements. Candidates may trade insults directly, but the real rabbit punches and low blows are saved for ads, where the mean stuff is impersonal and hard to respond to. By definition, negative campaigning can't happen in a debate. The other guy is there to answer. No good. There has been surprisingly little negative advertising in either party's nomination fights so far. On that basis alone, the aforementioned finger-wagging by Gore and Bradly qualifies as "tactical" and not genuine.

2. Negative campaigning obscures the source of the attack whenever possible. The best places to do this are radio and TV ads and direct mailings. Direct mail and radio (especially non-English speaking radio) is where a lot of the real doosies are launched, because journalists who do "Ad Watch" detective work on negative campaigning have a hard time keeping track of mailings and radio.

3. Negative ads are sneaky. Federal laws require a candidate who buys any political ad to identify himself, but this legal requirement will be met as anonymously as possible. Nowhere in the body of the ad will the allegations against the attackee be attributed to the sponsor of the ad. You will never see an ad that begins, "John Jones thinks Jim Smith is a liar and a prevaricator...." Smith's moral inelegance will always stated as a fact.

4. The real smears are often sponsored by "Independent Expenditure Groups," which supposedly are not connected to the candidate they are designed to help. Candidates, wishing to be free of any backlash from playing the negative game, are always shocked" that some independent group is engaging in such tactics. It's illegal for a candidate's campaign staff to "coordinate" any such advertising with the independent group. That law is a joke.

5. Keep it simple. A negative TV ad looks primitive compared to the expensive, glossy ads the candidates sponsor to talk about themselves. Frequently it's built around black and white still pictures and newspaper headlines. Typically, a truly negative ad will overstate, misstate, oversimplify or quote out of context some past statement or action by the candidate being attacked, forcing him to spend money and time to respond. Often, the response never catches up with the attack. The consultant who thought of this can then raise his fees.

In producing a negative ad, campaign consultants will always find a picture of the opponent which makes him look as bad as possible - sneer on lips, eyes crossed, hair mussed. Specialists - called opposition researchers - are employed to find such photos. In politics, being an "oppo" researcher is regarded as honorable employment.

6. It didn't start with Marconi. Before there was radio and TV, there were posters, leaflets and newspapers. And plenty of ugly, negative rhetoric. In the 1800 campaign, an opponent of Federalist Presidential candidate John Adams described him thusly in a printed hand-out:

"This apostle of the parsons of Connecticut is not only a repulsive pedant, a gross hypocrite and an unprincipled oppressor but . . . in private life one of the most egregious fools upon the continent."

In 1884, candidate Grover Cleveland, who had fathered a child out of wedlock, was described by an opponent as "a champion libertine, an artful seducer, a foe of virtue, an enemy of the family, a snare to youth and hotile to true womanhood."

No one has said anything like that about an opponent this time. Of course, there are still nine months to go.