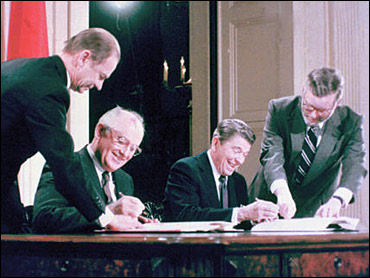 All this week, CBS News is taking a look at the Reagan legacy. Tonight's report looks at Ronald Reagan's strategy for dealing with the Soviet Union -- the Cold War that ended with the end of the Soviet Union.

Ronald Reagan's greatest achievement, ending the Cold War, is most remarkable because he had waged the Cold War so aggressively.

As CBS News Correspondent Wyatt Andrews reports, by Reagan's third year in office he had spent $1 trillion building up the U.S. military.

Europe was in turmoil over new missiles he ordered aimed at the Soviet Union, and a tough sounding Reagan promised communism was going down.

"Freedom and democracy, which will leave Marxism-Leninism on the ash heap of history," he said in a 1983 speech.

Then history gave Reagan a partner. In 1985, Reagan and the new Soviet leader Mikhail Gorbachev met in Geneva. Gorbachev recalls their mutual distrust.

"I told my colleagues Reagan was a dinosaur, while he called me a hardline Bolshevik," says Gorbachev.

But the two men approved a simple statement that a nuclear war could not be won. And Gorbachev remembers feeling that this hawk, Reagan, actually meant what he said.

You cannot overstate the tension in the world at the time. The U.S. and Soviet Union each had 25,000 nuclear warheads aimed at the other. Stepping back from that kind of threat wasn't thought possible.

And yet stepping back is what they did. Astonishingly, for two days in Reyjavik, Iceland, Reagan and Gorbachev discussed eliminating nuclear weapons.

The meeting broke up badly when Reagan would not give up his dream of a defensive shield called Star Wars.

But Shultz said the anger outside the meeting masked the huge accomplishment inside.

"They had seen the president's resolve, but we had seen their bottom line," says Shultz. "We knew they were ready to cut strategic arms in half."

What followed was a succession of nuclear arms agreements.

Reagan himself would have credited others, starting with Gorbachev, as the Cold War ended.

Reagan foresaw taking communism to the ash heap, but to all of his admirers, every day without the threat of nuclear annihilation dawns thanks to the skill of Ronald Reagan.