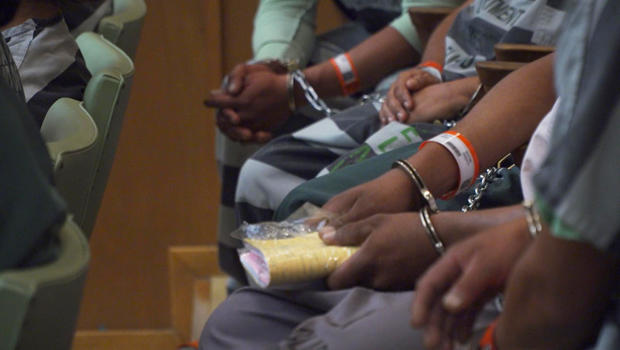 "Anger got the better of me," said Bill Peyser, who took what was meant to be a noise complaint to another level, when he brought the handgun with him.

Back in April of 2017, he got so frustrated with his loud neighbors, that instead of just knocking on their door, surveillance cameras captured him pointing a handgun at it, and kicking it. Bad enough, but then the gun went off … accidentally, he said.

"I never should have done anything like that," Payser said. "That's a crazy, dangerous, irresponsible, uncalled-for thing to do. But that's what I did, and I got myself arrested."

No one was hurt, but the retired San Francisco cab driver knew he was in pretty deep trouble. Negligently discharging a firearm was his first thought, but much to his surprise, he found himself charged with attempted murder instead.

Correspondent Lee Cowan asked Peyser, "Was that something you could afford to pay?"

"Not even close!" he laughed.

So, he went to jail – pretrial detention, as it's called. Peyser said, "I thought I'd be there a few days until these people came to their senses and straightened things out and charged me with what I actually did. What actually happened was, I spent six months in jail for crimes I never committed."

Peyser, who had never been in trouble with the law before, was locked up for one reason: he didn't have enough money to buy his freedom. And he isn't alone. It's estimated at least 60% of the people in jail today haven't been convicted of anything.

Phil Telfeyan, executive director of the non-profit Equal Justice Under Law, said it is estimated there are more than 450,000 people in jail today simply because they can't pay their bail.

"It's unfair, inefficient, and a complete cost to taxpayers, for no public safety benefit," he said. "There's no rationale behind the money bail system."

Equal Justice Under Law is dedicated to scrapping the cash bail system entirely, all across the country. "We're not arguing that everyone has to be released, or everyone should stay in jail," Telfeyan said. "All we're arguing is that wealth status should not be the main criteria for who says in jail and who's released. That is the opposite of what the framers of the Constitution had in mind when they wrote the Bill of Rights."

In the Constitution, the 14th Amendment guarantees equal protection under the law. But it's the 8th Amendment where bail is mentioned specifically, stating is shall not be "excessive."

Last year, a 22-year-old Detroit man was charged with two misdemeanors after he fired a paintball gun at an unmarked police car. Although he had a clean record, the judge set bail at $30,000. "But I don't have no money to pay that bail!" he cried.

Robin Steinberg, a retired public defender in the Bronx, has watched the impact of cash bail unravel her clients' lives for years. "The purpose of bail was to allow people to pay it, and then incentivize them to come back to court," she said.

Now, "It has become punishment."

It also incentivizes them to plead guilty, even if they are innocent. "People being held in jail on cash bail will plead guilty 90% of the time so they can go home," Steinberg said.

"And right then, at that moment, they're obviously not thinking about what that means on their record years down the road? They just want to get out of jail?" asked Cowan.

Private bail bonds companies get people out of jail all the time. It's a $2 billion-a-year industry in this country. Gloria Mitchell, a second-generation bail bondswoman in Pomona, California, said, "We understand that people just don't have that kind of money sitting around, but bail provides that.

"Of course, we can't do it for free, 'cause we're putting our name to guarantee."

Her fee is generally about 10% of the bail amount. That's money the accused offenders don't get back, even if they're found innocent.

That's what happened to Alex Kundel, after he says he was wrongly accused of attacking a man on a street near his home. "I never assaulted him, never abused him, never put my hand on him," he said.

Not only did he have two dogs to take care of; he was the only caregiver for his ailing grandmother. So, he turned to a bail bondsman to cover the 10% of his bond. It cost him $15,000.

"I still owe $8,500," he said. He pays it back in installments, which he expects to be doing for many years.

"All because of an accusation?" Cowan said.

In fact, a judge threw out his case shortly after his bond was posted. Had he paid the bail himself, he would have gotten all of it back.

It's stories like this, and worse, that gave Robin Steinberg an idea: Why not step in and pay bail for those who needed it most, and do it at no cost to them?

"The Bail Project is designed to answer that immediate emergency crisis of human beings sitting in jail cells who haven't been convicted of crimes, who are there only because they don't have enough money to pay their bail," she said.

Using philanthropic dollars, she's amassed a pot of money that she can use to bail out one client after another, without losing a cent. "When you pay bail, if somebody makes their court appearances, the bail comes back at the end of the case." The money is then used for another detainee.

So far, that revolving fund has bought the freedom of more than 5,000 people since last year. And 96% of the time, people come back for each and every court appearance. "And understand that those court appearances will sometimes go on not for months, but years," Steinberg said.

One of the people she bailed out, Ramel Edwards, was arrested for riding his bike on a sidewalk. He referred to Steinberg as a hero, "a perfect stranger that just come to help you. … I didn't have the money to get out and fight my charge from the outside."

All he needed was $150, 10% of his bail amount. But without it, he sat in jail for five days. That time behind bars cost him his job. "So, I'm being punished before I was sentenced," Edwards said.

He tried finding other work, but no one would hire him while his case was winding its way through the legal system. "I had two job offers rescinded because of the charges," he said.

After two years of fighting, the charges against Ramel were dropped.

He was later hired by the Bail Project to go back to that same New York City jail where he had given up hope, to give hope to someone else.  "I'm a hero in training!" he said.

Rasha Almulaiki is also working with the Bail Project. Cowan found her outside Detroit's Wayne County Jail, where she had just made bail for Karena Jones' partner, Bryant, who had been locked up for more than a month. He lost his job because he couldn't make bail, and Karena had to quit hers to take care of their four kids.

"I'm so happy we're able to get you out," Almulaiki said.

For those who worry there's a public safety risk to releasing those who are accused but not convicted, Phil Telfeyan says they need look no further than the nation's capital. Washington, D.C. largely did away with its cash bail system back in 1992, and statistics show it has not caused an increase in crime.

There are growing efforts to change the system all across the country. Nearly a dozen states have some kind of bail reform legislation already pending. New York just moved one step closer to eliminating cash bail, following California, which did so last year.

It's controversial, and it's being fought tooth-and-nail by the bail bonds industry.

For Gloria Mitchell it would be the end of a family business. "You're talking about 3,000 bail agents just losing their jobs," she said. "But nobody wants to hear that part of it. They just think that we're here for the money."

Any kind of reform, though, is too late for Bill Peyser, who like so many others was punished before he ever saw a day in court.

When that day finally came, he was acquitted on all charges.

"Your connection to your life as you knew it, is broken," he said.

Cowan asked, "And does it stay broken?"

"Yes," Peyser replied. "I will never be the same."