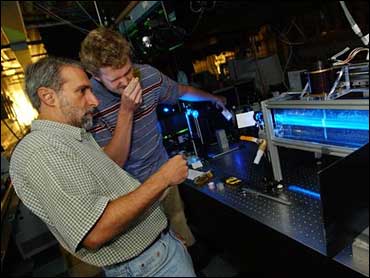 Daniel Nocera arrives at his office at the Massachusetts Institute of Technology by 7 a.m., goes home 13 hours later — where he often reads papers or e-mails students much of the night — and returns to his labs on weekends.

None, really, unless you count chemistry conferences.

After all, trying to save the world is hard work.

If you ever wonder about how the world will produce enough
energy to supply 9 billion people by mid-century — and whether that can be done without pumping off-the-charts amounts of carbon
dioxide into the air — meet one of the minds trying to produce an
answer.

Nocera, 48, is trying to achieve an old, elusive dream: using
the bountiful energy in sunlight to split water into its basic
components, hydrogen and oxygen.

The elements could then be used to supply clean-running fuel
cells or new kinds of machinery. Or the energy created from the
reaction itself, as atomic bonds are severed and re-formed, might
be harnessed and stored.

There is a beautiful model for this: photosynthesis. Sunlight
kickstarts a reaction in which leaves break down water and carbon
dioxide and turn them into oxygen and sugar, which plants use for
fuel.

But plants developed this process over billions of years, and
even so, it's technically not that efficient. Nocera and other
scientists are trying to replicate that — and perhaps improve on it in decades.

Hydrogen is the most abundant element in the universe, but it's
generally locked up in compounds with other elements. Currently, it
is chiefly harvested from fossil fuels, whose use is the main cause
of carbon dioxide emissions blamed for global warming.

And so while hydrogen fuel cells — in which hydrogen and oxygen
combine to produce electricity and water — have a green reputation,their long-term promise could be limited unless the hydrogen they consume comes from clean sources.

That's where Nocera's method comes in. If it works, it would be
free of carbon and the epitome of renewable, since it would be
powered by the sun. Enough energy from sunlight hits the earth
every hour to supply the world for months. The challenge is
harnessing it and storing it efficiently, which existing solar
technologies do not do.

"This is nirvana in energy. This will make the problem go
away," Nocera says one morning in his MIT office, where the
Grateful Dead devotee has a "Mean People Suck" sticker on his
window. "If it doesn't, we will cease to exist as humanity."

Lots of people have explored this challenge, but Nocera had a
big breakthrough when he used light to coax multiple hydrogen atoms
out of liquid. The key was figuring out the right chemical
catalyst.

Nocera's 2001 paper on the process in the journal Science,
written with graduate student Alan Heyduk, turned heads. Venture
capitalists rang his phone off the hook offering to fund him in an
alternative-energy company.

The achievement, and its revolutionary prospects, won Nocera
this year's Italgas Prize, a $100,000 award given annually by an
Italian utility to a top energy researcher.

"Dan is even-money (odds) to solve this problem," says Harry
Gray, a renowned California Institute of Technology chemist who was
Nocera's graduate adviser.

But there's a catch. In fact, there's a few, and they illustrate
how hard it can be to move alternative energy beyond the
proof-of-concept phase.

Nocera has performed the reaction with acidic solutions, but not
water yet.

The catalyst he used was a compound that included the expensive
metal rhodium. To be a practical energy solution, it will have to
be made from inexpensive elements like iron, nickel or cobalt.

Nocera's reaction got the photons in light to free up hydrogen
atoms, but that's only half the equation. The harder part will be
to also capture the oxygen that emerges when water molecules are
split. That way, both elements can be fed into a fuel cell, making
the process as efficient as possible.

Nocera and scientists not affiliated with his work say those
steps are achievable. But first, major advances in basic chemistry
will be necessary for the reactions to be well understood.

As a result, Nocera believes it might be 20 years before
engineers might design systems based on his work. And he frets that
too few scientists are exploring the problem, with many top minds
instead focused on biomedical research.

There's another big hurdle. While Nocera plugs away at trying to
save the world, some people don't believe it needs saving.

Most scientists concur that continuing to burn fossil fuels will
send the amount of carbon dioxide in the atmosphere — it's now 35
percent higher than in preindustrial times — to dangerous levels,
causing global temperatures to rise with potentially devastating
effects.

"We are literally poisoning ourselves," Nocera says. "People
don't get it because they can't see it."

But this is a famously politicized topic in the United States,
where some powerful political leaders question the science behind
global warming. And that, many scientists say, diverts attention
and funds from trying to solve the problem.

And even among people who believe global warming's risks are too
great to ignore, there is no consensus on what kind of green energy
should come to the rescue.

Nocera cites a calculation by Caltech chemist Nathan Lewis that
power demands in 2050 will be so great that just to keep carbon
dioxide emissions at twice preindustrial levels, a nuclear plant
would have to be built every two days. There's not enough room on
the planet's surface for other widely touted solutions such as wind
and biomass to have much impact.

Only the sun is the answer, Lewis argues.

Critics of that vision say many energy technologies being
explored — including improved ways of storing electricity and
different kinds of fuel cells — will come online in the next few
decades and throw off today's extrapolations about the future.

Arno Penzias, who won the Nobel Prize for confirming the Big
Bang and now invests in alternative energy startups for New
Enterprise Associates, contends there are dozens of ideas more
promising than ones involving hydrogen.

When told about Nocera's project, Penzias gets heated, saying it
is unlikely to be practical.

"It is so far from being revolutionary that it's not even worth
mentioning," Penzias says. "It will be a big yawn."

Nocera seems to thrive on such opposition, because he expects to
prove naysayers wrong.

It's part of his blunt enthusiasm, which manifests itself when
he discusses the joys of teaching chemistry to freshmen ("They
love me") or when he meets with his grad students to discuss the
status of their research.

Those sessions often devolve into arguments over the meaning of
some data or the direction that projects ought to take. Provoked by
Nocera's intensity — he'll exclaim, "I'm dying here!" in a tone
resembling neurotic comic Larry David — tempers often rise.

One student recently threw an eraser at Nocera, leaving a pink
welt on his back that Nocera later showed off with a laugh.

"There were times I absolutely hated working for him, because
he knew how to press all of my buttons and drive me absolutely
insane," says Heyduk, now assistant professor of chemistry at the
University of California, Irvine. "He knew I was the kind of
person that needed to be challenged all the time."

Nocera believes this constant prodding at what's possible is the
essence of science. As evidence, he reels off several ancillary
developments from his research, including microscopic sensors that
detect biological hazards, which attracted funding from the Defense
Advanced Research Projects Agency.

Pointing to a whiteboard sketch of his vision for using sunlight
to split water, Nocera acknowledges that it ultimately might not be
an energy panacea.

"Is it right? Maybe not. But it will be something. And it might
be something I can't see right now," he says. "That's OK. But you
don't stop doing something because you can't see it. It's
antiscientific. It's anti-intellectual."