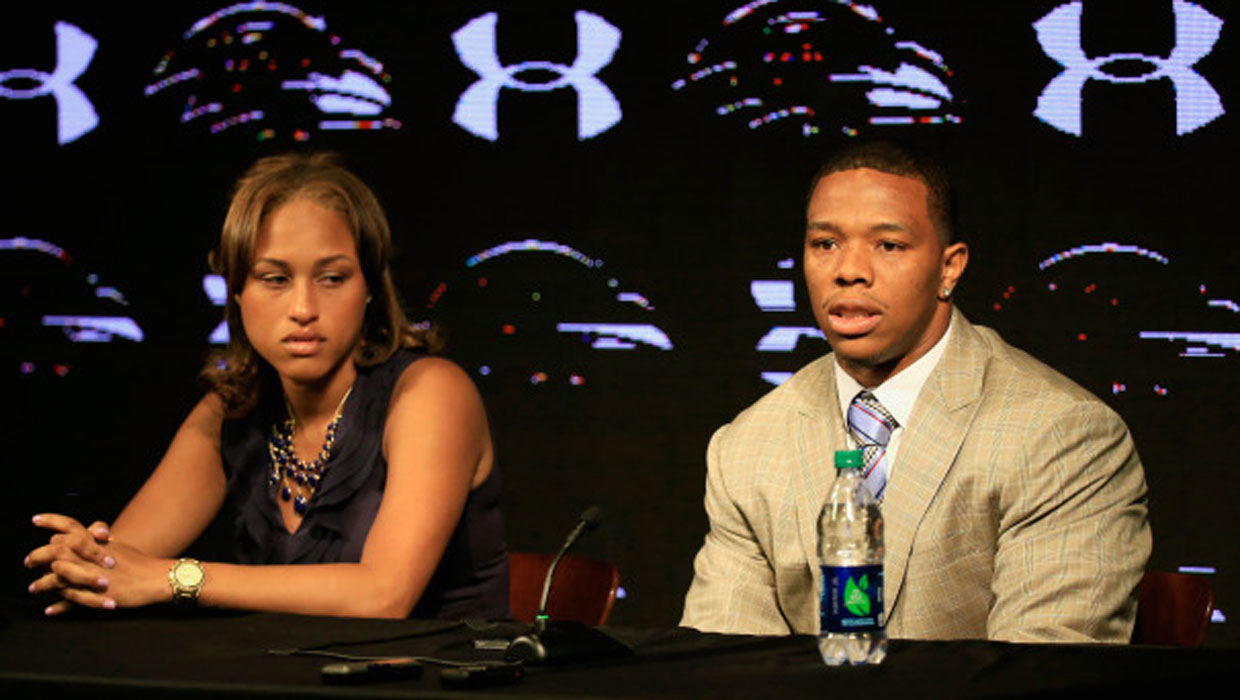 The Baltimore Ravens cut star running back Ray Rice from their roster Monday afternoon after video emerged earlier in the day appearing to show him punching and knocking out his then-fiancee and now-wife Janay Palmer.

The team announced the move on their Twitter feed.

The NFL also announced late Monday via a spokesperson's Twitter feed that they have taken action against Rice.

Coach John Harbaugh spoke to the media Monday night after practice, saying that upon seeing the video earlier in the day, he met with owner Steve Bisciotti, President Dick Cass and GM Ozzie Newsome to make a decision about Rice's future with the team, CBSSports.com reported.

"It was not a long meeting. We came to the decision we came to to release Ray and that's what we did," Harbaugh said. "So you know that. I had a chance to talk with Ray along with Ozzie this afternoon after we did it."

"It's something we saw for the first time today," Harbaugh said. "It changed things of course. It made things a little bit different."

Rice's lawyer, Michael Diamondstein, declined to comment when contacted by The Associated Press.

A public firestorm had already erupted earlier in the year when NFL Commissioner Roger Goodell leveled a mere two-game suspension on Rice for the violent incident involving Palmer.

Rice began his suspension Sunday, when the Ravens opened their season with a 23-16 loss to the Cincinnati Bengals. He was scheduled to return after Thursday night's game against Pittsburgh. According to the terms of his original suspension, Rice could not be with the team and must work out alone.

Rice leaves the Ravens as the second-leading rusher in franchise history, behind only Jamal Lewis. A three-time Pro Bowl selection, Rice is the team's career leader in total yards from scrimmage (9,214) and is the only player in Ravens history to rush for 1,000 yards in four consecutive seasons.

But those are mere numbers, and his actions in that elevator shed a new light on him.

"I don't know Ray Rice, but I know that video is disturbing," New Orleans Saints right tackle Zach Strief said. "It's tough to see and it's unacceptable. ... It's upsetting."

Yet Strief was not sure whether the NFL should be able punish Rice more because, "You'd compare that to double-jeopardy."

Video showing Rice dragging an unconscious Palmer out of an Atlantic City casino elevator contributed to the outcry over Goodell's initial, short suspension. At the time, few knew what happened inside the elevator.

Eventually, Goodell admitted he "didn't get it right," and released a memo to all team owners outlining a likely minimum six-game suspension for future domestic violence incidents, with mitigating circumstances allowing the punishment to by increased or decreased.

The controversy was rekindled early Monday after new video released by TMZ appeared to show what happened before Rice dragged Palmer out of the elevator.

In the video, two people that appear to be Palmer and Rice can be seen arguing, and the woman approaches the man at one point. The man that appears to be Rice than punches the woman quickly in the face with his left hand, and she drops to the floor, violently hitting her head on a railing on the way down. The man does not appear to bend over to check on her until the elevator doors open, when he then bends over and begins dragging her away.

In a statement on Monday morning, several hours after the new video was released, the NFL commissioner's office said: "We requested from law enforcement any and all information about the incident, including the video from inside the elevator. That video was not made available to us and no one in our office has seen it until today."

CBSSports.com's Jason La Canfora tweeted earlier in the day that while the Baltimore Ravens had not seen the inside-the-elevator video, Ray Rice had detailed what was shown in it previously, and he didn't "sugarcoat" its content.

The team had not publicly commented on the second video until they announced they had terminated Rice's contract.

White House spokesman Josh Earnest said Monday that while he hadn't seen the news, President Obama has repeatedly made "very forceful comments" about the need to make clear that violence against women is something that cannot be tolerated. Mr. Obama, a football fan, has not publicly spoken about the Ray Rice incident so far.

Both current and former NFL players have reacted angrily to Rice's place in the league after the second video was released.