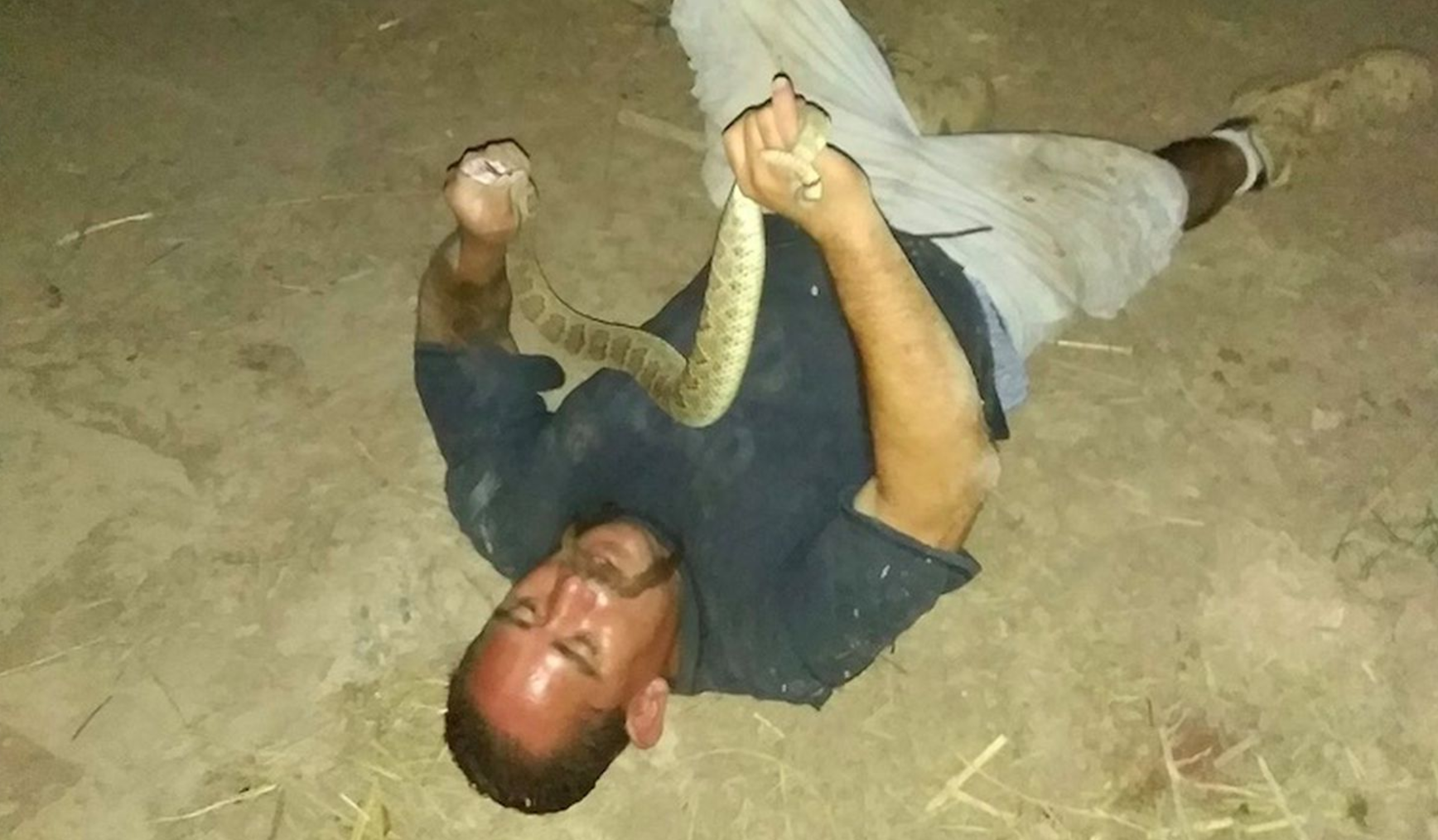 Victor Pratt has been catching rattlesnakes since he was about 8 years old, so he considers himself somewhat of a pro.

Earlier this month, while celebrating his son's birthday in Coolidge, Arizona, Pratt decided to show off his skills — a decision the 48-year-old soon came to regret.

"I wasn't thinking," Pratt told CBS affiliate KPHO-TV. "Instead of being a father, I was being a buddy."

Pratt spent the night trying to catch and cook a rattlesnake for his sons.

"I know how to cook them and cut the heads off and stuff," Pratt said. "They taste like chicken. Actually, it's not bad."

When he finally spotted one, Pratt pounced and wrestled the snake in the dirt. He posed for photos with the snake in his hands and around his neck. But then Pratt felt a sharp and piercing pain: he got bit — twice in his face and neck.

Rattlesnakes, which can range in length from one to eight feet, can strike with a venomous bite at speeds as fast as half a second.

"I saw him bleeding down," said Pratt's son, Samuel, told KPHO-TV. "He had it in his hand by the time I turned my head."

Pratt peeled the snake off of his body, as his face began to swell. Pratt's son drove him to a nearby emergency room, and he was airlifted to Banner University Medical Center in Phoenix.

If he hadn't sought medical treatment immediately, the story would have had a tragic ending, said Dr. Steven Curry, toxicology director at Banner University Medical Center.

"First aid measures usually are ineffective," Curry said. "The progression of swelling is very rapid, and these patients will commonly have an obstructed airway and be unable to breathe in just a few minutes."

Luckily for Pratt, he was able to get treatment in time. He received 26 vials of anti-venom, which costs several thousand dollars, and was finally able to breathe on his own again.

Between 7,000 and 8,000 people are bitten by venomous snakes in the U.S. every year, according to the CDC, and about five of them die.

Arizona sees as many as 350 cases rattlesnake bites per year, Curry said. The Banner Poison and Drug Information Center says there have been 87 reported snake bites in the state so far this year, including 16 in August and 17 so far in September — a peak month for snake bites.

With a bruised and swollen face, Pratt said the September 7 incident taught him an important lesson.

"I know not to be playing around with snakes no more," he said. "You have to be smart."

Social Security recipients could see $1,900 boost next year
Thanks for reading CBS NEWS.
Create your free account or log in
for more features.
View CBS News In
CBS News App Open
Chrome Safari Continue
Be the first to know
Get browser notifications for breaking news, live events, and exclusive reporting.