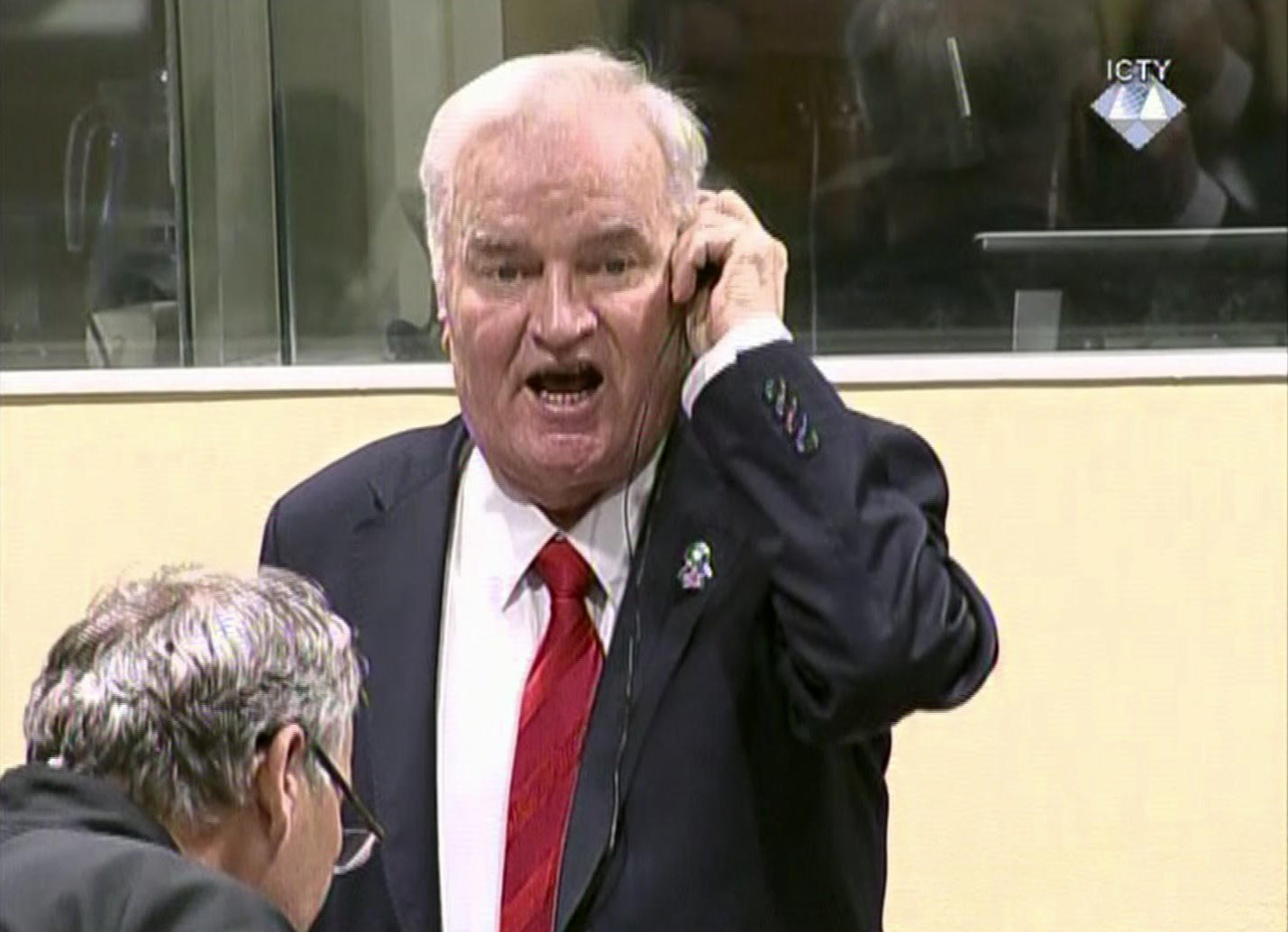 THE HAGUE -- The United Nations' Yugoslav war crimes tribunal on Wednesday found former Bosnian Serb military chief Gen. Ratko Mladic guilty of genocide, crimes against humanity and war crimes during Bosnia's devastating 1992-95 war, and sentenced him to life in prison for his crimes.

Mladic, 75, was found guilty of commanding forces responsible for crimes including the worst atrocities of the war - the deadly three-year siege of the Bosnian capital, Sarajevo, and the 1995 massacre of some 8,000 Muslim men and boys in the eastern enclave of Srebrenica, which was Europe's worst mass killing since World War II.

A three-judge panel at the court formally known as the International Criminal Tribunal for the Former Yugoslavia convicted Mladic of 10 of 11 counts in a dramatic climax to a groundbreaking effort to seek justice for the wars in the former Yugoslavia.

Presiding Judge Alphons Orie read out the judgment Wednesday after ordering Mladic out of the courtroom for the final verdict over an angry outburst.

"The crimes committed rank among the most heinous known to humankind," he said.

Mothers of Srebrenica's victims clapped when the convictions were read out. Mladic's son Darko said: "I'm not surprised. The court was totally biased from the start."

The three-judge panel found Mladic was part of a "joint criminal enterprise" which "intended to destroy the Bosnian Muslims in Srebrenica" and that, "the accused's acts were so instrumental to the crimes that without them the crimes would not have been carried out as they were."

The verdict and sentence were delayed by Mladic's removal from the chamber so his blood pressure could be checked. It was found to be high, and his legal team requested the judge skip the remainder of his summary and move swiftly to the reading of his verdict and sentence.

As the judge attempted to do so, Mladic lashed out verbally in the courtroom and was ordered removed. With the defendant relocated to an external room with a video feed of the proceedings, the judge continued reading his statement, and announced the guilty verdict and the life sentence.

A lawyer said later Wednesday that Mladic would appeal the convictions. Dragan Ivetic said "it is certain that we will file an appeal and that the appeal will be successful."

Ivetic argued that Mladic had been denied his "basic human rights" by not being allowed to see doctors of his choosing.

Mladic's son Darko Mladic accused the judges of obstructing his father's legal team in presenting evidence exculpating his father, saying the "judgment is wrong. It did not achieve anything... and will be an obstacle to future normal life in the region."

Prosecutors had sought a life sentence, while Mladic's defense lawyers said he should be acquitted on all counts.

The judgment marks the end of the tribunal's final trial. The groundbreaking court was set up in 1993, while fierce fighting was still raging in Bosnia.

The conflict in the former Yugoslavia erupted after the breakup of the former multi-ethnic federation in the early 1990s, with the worst crimes taking place in Bosnia. More than 100,000 people died and millions lost their homes before a peace agreement was signed in 1995.

Mladic's political master during the war, former Bosnian Serb President Radovan Karadzic was convicted last year for masterminding atrocities in Bosnia and sentenced to 40 years. He has appealed the ruling.

Karadzic was indicted along with Mladic in 1995 but evaded arrest until he was captured in Belgrade, Serbia, in 2008. At the time, he was posing as a New Age healer, Dr. Dragan Dabic, and was disguised by a thick beard and shaggy hair.

The man widely blamed for fomenting wars across the Balkans, former Yugoslav President Slobodan Milosevic, died in his UN cell in 2006 before tribunal judges could reach verdicts in his trial.

Mladic went into hiding after the war and remained a fugitive until his arrest in Serbia in May 2011.

Long before the hearing in The Hague started Wednesday, survivors began gathering outside the court.

Fikret Alic, a Bosnian man who became a figurehead for the suffering of Bosnians during the war when he was photographed as an emaciated prisoner behind the wire of a Bosnian Serb prison camp, was among those watching the hearing.

"I expect justice and truth and that he is convicted ... for genocide," Alic said before the verdict was delivered.