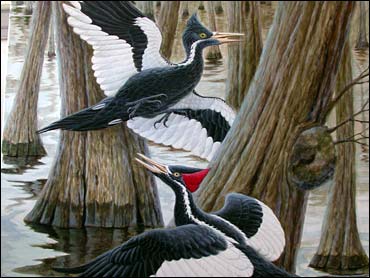 A search of the swamps of eastern Arkansas has turned up no new confirmed sightings of the ivory-billed woodpecker, leaving further question in the scientific community about whether the bird was rediscovered.

More than 100 volunteers and full-time researchers went through the region during the winter but failed to find additional clues of the bird's existence.

"Certainly we're somewhat disappointed," said Ron Rohrbaugh of the Cornell University Lab of Ornithology in Ithaca, New York. But the lack of evidence "doesn't mean the bird's not there," Rohrbaugh said.

Wildlife managers at the Cache River Wildlife Management Area, where the bird was first believed spotted after a six-decade hiatus in 2004, decided to reopen the area for public use. If new evidence about the woodpecker is discovered, state and federal agencies can reimpose restrictions on access, said Dennis Widner, manager of the wildlife management area.

A kayaker reported spotting the woodpecker on Feb. 11, 2004 along the Cache River. Researchers later recorded videotape and audio recordings of the bird, one of six North American bird species thought to have become extinct since 1880.

Some have challenged whether the bird was actually spotted. David A. Sibley, a bird illustrator from Concord, Massachusetts, wrote earlier this year the video is not good enough to see the white stripes on the bird's back that would prove it is ivory-billed.

Jon Andrew, the recovery team leader with the U.S. Fish and Wildlife Service, said the search will continue next year across the Southeast. Paid and unpaid searchers would look for evidence of the bird in Alabama, Georgia, Louisiana, South Carolina and Texas as well as Arkansas, Andrew said. The National Audubon Society said they would continue to support search efforts for at least one more year.

One volunteer searcher and three members of the public have reported seeing the bird, but none of the full-time researchers has spotted it, said Martjan Lammertink, also of Cornell. Lammertink said in all four cases, the birds sighted had large amounts of white feathers on the lower halves of the wings, consistent with an ivory-bill.