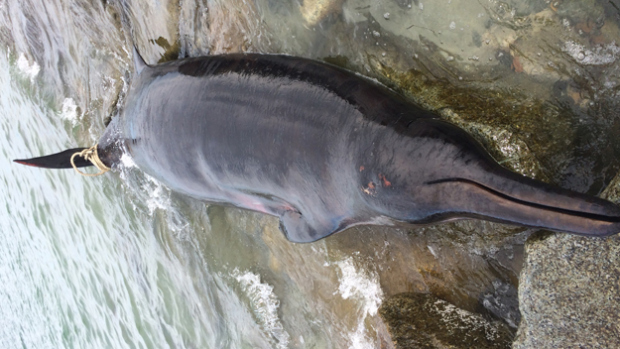 A 17-foot toothed whale, which is rarely seen in the area, washed ashore Jones Beach in Plymouth on Friday, reports CBS Boston.

The female whale, which weighs nearly one ton, has dark skin and a long slender snout. It is likely a member of the beaked whale family, which there are several species of in the north Atlantic Ocean.

Aquarium officials said this species of whale is normally found on the continental shelf several hundred miles out to sea.

An animal autopsy will be completed on Saturday at the Woods Hole Oceanographic Institution's necropsy lab. The whale carcass was in fairly good condition when it was discovered, officials said.

Because beaked whales spend most of their time in deep waters, little is known about them. They are most commonly seen by fishermen.