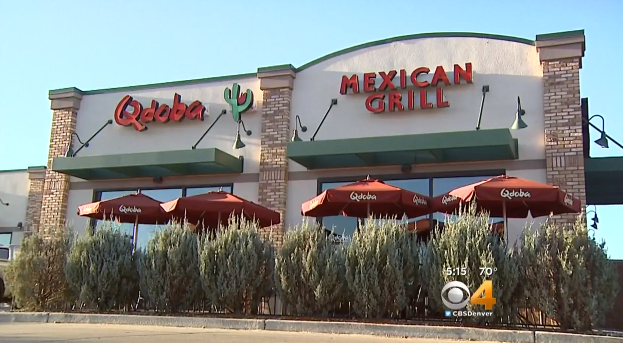 FIRESTONE, Colo. - Three cases of life-threatening typhoid fever have been confirmed in Colorado.

CBS Denver reports all three of the people sickened with the bacterial infection had eaten at a Qdoba Mexican Grill in Firestone in August.

Though the outbreak happened in August, the three illnesses were just reported in recent weeks because incubation of the rare infection and diagnosis take time, said state epidemiologist Dr. Lisa Miller with the Colorado Department of Public Health and Environment.

The infected customers came down with headaches, fever and other symptoms. "Two of these three people were actually hospitalized, so they were quite sick," Miller said. All three patients have now recovered, CBS Denver reported.

According to Miller, tests of employees showed the source of the illness was an infected food handler at the Qdoba who spread the salmonella typhi bacteria. The employee reportedly showed no symptoms of illness.

How did it get into the food? "Someone sheds it in their feces and contaminated food or directly contaminated something that somebody else ingests," Miller said.

"The good news is that worker is no longer handling food at the restaurant," Weld County Health Department spokesperson Eric Aakko said.

Miller said there is no evidence of any ongoing health risk.

In a statement, Qdoba said, "Although the restaurant's operations have not been impacted, as a precaution the franchisee stepped up sanitation of all touch points in the restaurant and discarded all food the worker may have been in contact with."

Typhoid fever is rare and can be deadly. The U.S. Centers for Disease Control and Prevention says about 5,700 cases are reported in the United States each year, mostly in travelers who contracted the bacteria overseas. The disease is more common in developing countries, where it often spreads through contaminated food and water.

The illness is treated with antibiotics, although some strains are becoming antibiotic resistant. There is also a vaccine for typhoid fever which is recommended for some international travelers.

Health officials in Colorado said the state averages about five cases a year.