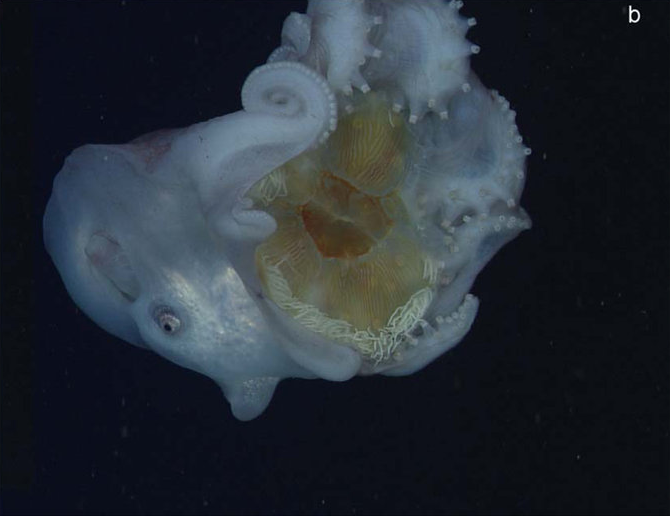 This week journal Scientific Reports revealed that a seven-armed octopus was observed clutching an unusual type of prey: an egg-yolk jellyfish, Phacellophora camtschatica.

Jellyfish is generally thought to be not particularly nutritious, but the octopus had eaten most of the tissue hanging down from the bell. MBARI scientists think she might have been using the remaining parts of the jellyfish, the bell and the stinging tentacles, for defense or for catching a tastier meal.

The deep-sea giant, Haliphron atlanticus, is a shy beastie: In nearly three decades of research, the Monterey Bay Aquarium Research Institute has only managed to observe the cephalopod on three occasions.

The octopus’ name comes from the male of the species, which keeps its hectocotylus tucked away, making it seem like it has just seven arms. These males are also pretty small, coming in at around 12 inches in length. It’s the females that are the heavyweights — they can measure up to 13 feet in length, and weigh up to 165 pounds. The species lives in the pelagic zone, and most of what is known about it comes from dead specimens caught in trawl nets.