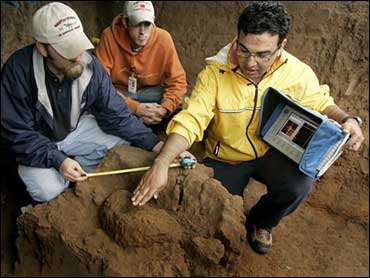 Scientists were excited when they pulled a 154-pound meteorite from deep below a Kansas wheat field on Monday, but what got them most electrified was the way they unearthed it.

The team uncovered the find four feet under a meteorite-strewn field by using new ground-penetrating radar (GPR) technology that someday might be used on Mars.

It was that technology that pinpointed the site and proved for the first time that it could be used to find objects buried deep in the ground and to make an accurate three-dimensional image of them.

"It validates the technique so we can use something similar to that instrument when we go to Mars," said Patricia Reiff, director of the Rice Space Institute.

Such GPR systems had been used in the past to locate smaller meteorites in Antarctica, where ice allows the sonar to penetrate more easily. But until the Kansas dig, the technology had not been successfully used for ground detection in heavy soils — like on Mars — to find meteorites or water.

The dig was likely the most documented excavation yet of a meteorite find, with researchers painstakingly using brushes and hand tools to preserve evidence of the impact trail and to date the event of the meteorite strike. Soil samples also were bagged and tagged and organic material preserved for dating purposes.

"When we find a piece of meteorite, each one is a new sentence we add to the book to understand the evolution of the solar system," Essam Heggy, planetary scientist at the Johnson Space Center's Lunar and Planetary Institute in Houston.

Even before they had the pallasite meteorite out of the ground, the scientific experts at the site were able to debunk prevailing wisdom that the spectacular Brenham meteorite fall occurred 20,000 years ago. Its location in the Pleistocene epoch soil layer puts that date closer to 10,000 years ago.

"We know it is recent," said Carolyn Sumners, director of Astronomy at the Houston Museum of Natural Science, as she surveyed progress on the dig. "Native Americans could have seen it."

The expedition was put together by the Houston Museum of Natural Science and led by meteorite hunters Steve Arnold and Philip Mani. Johnson Space Center's Lunar and Planetary Institute, the Rice Space Institute at Rice University and George Observatory in Houston also sent researchers.

Fewer than 1 percent of the meteorites discovered on earth are pallasite meteorites, known for their crystals embedded in iron, Mani said.

Sophisticated metal detectors at the site initially detected what had been thought to be the largest pallasite meteorite ever discovered. But ground-penetrating radar showed that the object was only a steel cable.

The Brenham field was discovered in 1882. Scientists have since traced pieces of the shower as far away as Indian mounds in Ohio, indicating the meteorites were traded as pieces of jewelry and ceremonial artifacts.

The site was largely forgotten in recent decades until Arnold and Mani leased eight square miles of it and began looking deep below the surface. More than 15,000 pounds of meteorites have been recovered from the area.

This week's find will end up as part of a new exhibit on comets, meteors and asteroids at the Houston Museum of Natural Science. The museum will pay about $50,000 for it, Sumners said. It is valued at more than $100,000, she said.

Landowner Alan Binford watched with interest as the scientists freed the meteorite, bagging clumps of his rich Kansas farmland around it.

"I didn't figure there would be that much scientific value," he said. "I never thought about them going to this extent. It is interesting history."