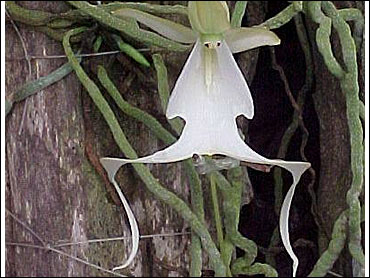 A rare ghost orchid has been found growing high in an old cypress tree in a southwest Florida nature preserve.

The endangered flower made famous in the nonfiction book "The Orchid Thief" and the fictional movie spinoff "Adaptation" is about 45 feet off the ground in a tree at Corkscrew Swamp Sanctuary in Naples.

Two visitors looking for owls on Saturday spotted it about 150 feet from the sanctuary's boardwalk. It can be seen only with binoculars and good lighting.

The orchid, which blooms for about two weeks, has nine flowers, triple the usual number. It is not clear how long this ghost orchid has been blooming.

Naples photographer Ralph Arwood spent hours waiting to get a shot of the rare blooms.

"They're very rare, and this one is unusual because it has so many flowers," Arwood said. "They're pretty impressive flowers, too, as big as your hand. It's nice to have it at Corkscrew. If it's here, it's safe."

Park Manager Ed Carlson said the orchid could have been in the tree for decades. It is the first ghost orchid discovered near the sanctuary boardwalk in 12 years.

"It's got a big, old root mass on it," he said. "We've just never seen it before. I'm sure it's been blooming, but they bloom in June and July, and that's when cypress are leafed out. So, it's possible a cypress branch covered it up all those years and fell off in Hurricane Wilma. Who knows?"