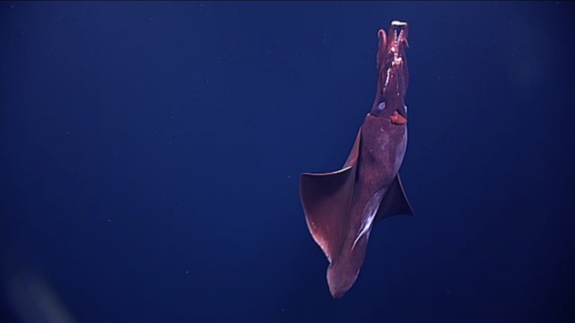 A squid with shiny, bioluminescent "spotlights" tipping two of its arms and what look like waxy red lips shared a close encounter with a remotely operated vehicle (ROV) in deep ocean waters near Hawaii.

And the underwater face-to-face was captured in a spectacular video by cameras attached to the ROV, operated by the National Oceanic and Atmospheric Association (NOAA) Office of Ocean Exploration and Research.

The squid even attached itself to the vehicle and "hung out there for several minutes," according to a dive update posted on NOAA's Okeanos Ocean Explorer website.

Though initially identified by a scientist on the vessel as a "whiplash squid," the cephalopod was actually a Dana octopus squid, or Taningia danae. That animal is similar in size to a whiplash squid, but lacks the two long feeding tentacles that are common in most other squids. [See Images of the Shiny Dana Octopus Squid]

The deepwater star of the video is estimated to measure between 3 and 7 feet (1 and 2 meters) in length. Broad, flexible fins extend from the squid's mantle; as they furl and flap, these fins steer T. danae through the water.

On the underside of the mantle protrudes a shape resembling a red-lipped mouth. It's really a siphon, however, used to eject water from the mantle cavity behind the eyes and propel the animal in reverse, said Scott France, a marine biologist and co-science-lead on the NOAA expedition, whose voiceover describes the squid on the video.

While the Dana octopus squid may lack a squid's trademark trailing tentacles, it makes up for them in spectacular lighting equipment, with two of its muscular arms ending in lidded light organs called "photophores." About the size of lemons, these photophores are the largest known light-producing organs in the animal kingdom, said Mike Vecchione, a zoologist at the NOAA National Systematics Laboratory at the Smithsonian Institution and a curator of cephalopods at the National Museum of Natural History, both in Washington, D.C.

In two video clips -- one dated Sept. 19 and one dated Sept. 24 -- an octopus squid swims close to Deep Discoverer, a remote-controlled marine-exploration vehicle operated from the Okeanos Explorer vessel, part of NOAA's Hohonu Moana Expedition that's exploring deep waters off Hawaii. And both clips show the squid's photophores lighting up, as the lids covering them were lifted.

Flashing these high beams could be a defensive move, Vecchione told Live Science. In the darkness of the ocean depths, a sudden flash of light could temporarily blind a predator, giving the squid a chance to escape, he said.

Vecchione suggested that the squid might also use light flashes to startle prey, making them freeze just long enough for the squid to grab hold.

According to Vecchione, the squid's flashing at the ROV could support another hypothesis about how ocean creatures use bioluminescence, lighting up as a way to attract a bigger predator to attack the more immediate threat.

The Hohonu Moana Expedition lasted from July 10 to Sept. 30, investigating deep-sea ecosystems and capturing video and images of the strange underwater life -- big and small, drab and flashy -- that inhabits them.

​Largest space map ever shows Milky Way in 46B pixels