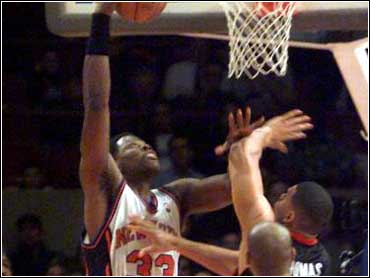 Hype is one thing, legitimacy is another. Vince Carter wants to move from that first plateau to the next.

Carter put on another performance Wednesday night worthy of his ever-increasing accolades, taking over the game by scoring 15 of his 33 points in the third quarter to lead the Toronto Raptors past the New York Knicks 99-88.

"The All-Star game is over. The Letterman show is behind me. Guys wondered if I'd remain focused," said Carter, who also had nine rebounds and nine assists to barely miss his first NBA triple-double. "I still have to show up on the floor. That's the proving I have to do no matter how much media I get. I still have to give 110 percent."

The hype surrounding Carter shows no signs of slowing. He appeared in mailboxes all across America on Wednesday on the cover of Sports Illustrated, and on Sunday he'll make his first appearance with the Raptors in a nationally televised game when Toronto plays Phoenix on NBC.

Carter also gave plenty of ammo to the folks producing the highlight reels, throwing down two incredible dunks and making several closely contested jumpers as part of his evening.

"Once I started hitting, the rest of the team looked for me," Carter said. "Four quarters of good basketball was refreshing. We haven't done that in a while."

Doug Christie added 22 points and Tracy McGrady had 16 for the Raptors, who snapped a three-game losing streak, ended New York's five-game home winning streak and knocked the Knicks out of first place in the Atlantic Division.

Patrick Ewing scored 24 points to move past Adrian Dantley into 15th place on the career scoring list. Just two days earlier, Ewing passed Elgin Baylor to move into 16th place. Ewing now has 23,181 career points, with Robert Parish the next player ahead of him with 23,334.

The Raptors used runs of 20-3 in the first half and 19-5 in the second to make the difference. The victory allowed Toronto to avoid what would have been its first four-game losing streak of the season.

The 19-5 run came to close the third quarter as Carter started taking over the game. Smirking and scowling at whoever the Knicks tried to guard him with, usually Latrell Sprewell or Larry Johnson, Carter did his damage with a array of pull-up jumpers and drives to the basket.

He capped a personal 5-0 run late in the fourth by driving around Allan Houston at the 3-point line and slamming in a dunk for a 97-86 lead with 2:11 left.

"Some of the shots he made were very tough," Ewing said. "He was elevating over guys and shooting and they were going in. He is probably similar (to Michael Jordan). He is a great player, but I'm not sure he is at the level of Michael."

New York jumped out to an early nine-point lead, 15-6, then allowed Toronto to go on a 20-3 run fueled by 12 points from Christie for a 26-22 lead after the first quarter.

Charles Oakley had a 3-pointer and an alley-oop pass to McGrady to give Toronto a 31-24 lead, and Carter followed with a crowd-pleasing, high-rising slam to make it 33-26. Chris Childs hit a pair of 3-pointers to fuel a quarter-ending 21-9 run that gave the Knicks a 47-42 halftime lead.

A turnaround jumper by Ewing gave the Knicks a 62-52 lead before Carter began his third-quarter outburst that led Toronto to a 71-67 lead entering the fourth.

The Knicks got no closer than three points in the final 12 minutes.