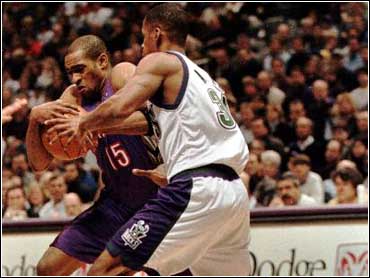 Vince Carter got the last word in the Toronto Raptors' heated season series against Milwaukee.

Carter had 30 points, 11 rebounds and five assists in Toronto's 98-95 victory over Milwaukee on Saturday night.

The second-year star had a career-high 47 points against Milwaukee last month, and averaged 31.5 points in four games against the Bucks..

"He beat us tonight with his rebounding as much as anything else he did," Milwaukee coach George Karl said. "He's on the verge of becoming a great player. He's got great explosion to the rim."

The victory evened the season series at 2-2. The teams played a confrontation-filled two-game series last month, capped by a fight in the second game in Milwaukee.

"There's some sense of relief that Milwaukee can't walk around with their chests pumped all summer," Toronto coach Butch Carter said.

Carter, snubbed by U.S. Olympic team selectors in favor of Milwaukee's Ray Allen, scored 12 points in the first quarter. The Raptors built their lead to 48-34 at halftime by holding the Bucks to 30-percent shooting.

"Dell seemed to make a big shot every time we needed one," Carter said. "I understand why Karl wanted to keep him. I told our owners it was the best $2 million they ever spent."

Milwaukee used a 17-4 run to get within six in the final minute of the third quarter. A field goal by Carter and a running 3-pointer at the buzzer by Muggsy Bogues gave Toronto a 0-59 lead.

Bogues slapped the ball away from unsuspecting Cassell, who was going up for a layup, before running at full speed to get off a desperation shot. It banged on the rim and fell through.

Carter dominated early in the final quarter, scoring Toronto's first eight points. But the Bucks made things interesting by closing within five at 85-80 with 3:44 remaining.

Curry's fourth 3-pointer gave the Raptors an 89-85 lead with 58 seconds to play. Milwaukee's Tim Thomas and Cassell, who rebounded a missed free throw by Thomas, made field goals in a three-second span to make it 92-89 with 50 seconds left.

Carter was fouled on his baseline drive and made two free throws for a five-point lead with 33 seconds left. Allen's dunk was offset by two free throws by Bogues, who made two more following a field goal by Robinson for a 98-93 lead.

The Bucks had one chance to tie. After Robinson made two free throws, he missed a running 3-pointer after a turnover on a long inbounds pass.

"We've made a lot of comebacks in this building," Karl said. "Tonight we had too big a hole."