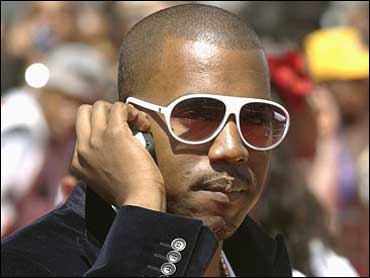 A live telethon designed to raise money for victims of Hurricane Katrina has raised some eyebrows, as well.

During "A Concert for Hurricane Relief" airing on NBC and other networks, rapper Kanye West blasted President Bush for the slow start to the recovery effort. West alleged, in his words, "George Bush doesn't care about black people." He also claims America is set up to help the poor "as slow as possible." The comments were heard when the program aired on the East Coast, but censored from the taped show played later on the West Coast.

There was a several-second tape delay, but the person in charge "was instructed to listen for a curse word, and didn't realize (West) had gone off-script," said NBC spokeswoman Rebecca Marks.

Earlier Friday, some black lawmakers questioned whether race played a role in the rescue effort of the hurricane victims.

As for the rest of the show, fittingly enough, it began with jazz from New Orleans natives Harry Connick Jr. and Wynton Marsalis.

The show, simulcast from New York on NBC, MSNBC, CNBC and Pax, was aired live to the East Coast, enabling the Grammy-winning rapper's outburst to go out uncensored.

The host was NBC News' Matt Lauer, who invited viewers to contribute to the American Red Cross Disaster Relief Fund by phone or on the Web. Some 18 presenters performed musical numbers or gave information on the tragedy's huge scope.

Louisiana native Tim McGraw teared up as he told Lauer, "I know the citizens that weren't affected by this directly are gonna stand up and do good things for people." He sang two songs, then became the first of the evening's stars to sign a Gibson Les Paul Special guitar to be auditioned online.

Faith Hill, a Mississippi native, sang "There Will Come a Time," with the inspiring lyrics, "The darkness will be gone, the weak shall be strong. Hold on to your faith."

New York governor George Pataki presented the Red Cross with a check for $2.5 million and promised, "This great state will do far more."

"In terms of property damage," said actress Hilary Swank, "the estimate is at least $26 billion in insured losses and perhaps twice that in uninsured losses over a 90,000-square-mile area — approximately the size of Kansas."

While allowing that "the Red Cross is doing everything they can," West, who delivered an emotional outburst at the American Music Awards after he was snubbed for an award, declared that government authorities are intentionally dragging their feet on aid to the Gulf Coast. Without getting specific, he added, "They've given them permission to go down and shoot us."

After he stated, "George Bush doesn't care about black people," the camera cut away to comedian Chris Tucker.

Concluding the hour a few minutes later, Lauer noted that "emotions in this country right now are running very high. Sometimes that emotion is translated into inspiration, sometimes into criticism. We've heard some of that tonight. But it's still part of the American way of life."

Then the entire ensemble performed "When the Saints Go Marching In."

In a statement, NBC said, "Kanye West departed from the scripted comments that were prepared for him, and his opinions in no way represent the views of the networks.

"It would be most unfortunate," the statement continued, "if the efforts of the artists who participated tonight and the generosity of millions of Americans who are helping those in need are overshadowed by one person's opinion."

Friday's program was the first of several TV benefits planned through next weekend.

NBC and the five other major commercial broadcast networks, along with PBS, plan to unite next Friday for a special. The same night, BET will air a benefit. And on Saturday, Sept. 10, the MTV networks will air a special.