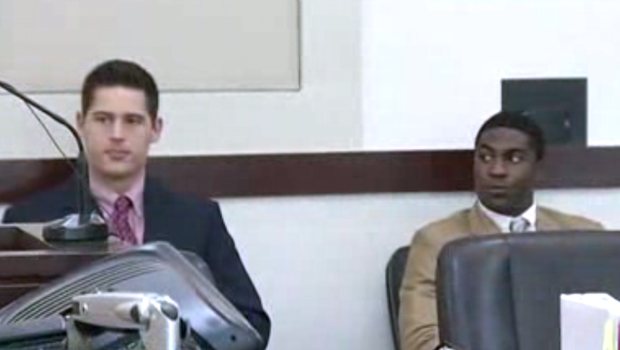 Closing arguments are expected to begin Monday in the trial of two former Vanderbilt University football players accused of raping an unconscious woman in a dorm room, recording the attack on their cell phones and sharing it.

Prosecutors say Cory Batey and Brandon Vandenburg laughed and took photos as a group of men raped and defiled a female student.

Two other former players, Brandon Banks and Jaborian McKenzie, have also been charged and will be tried at a later date.

The alleged assault took place on June 23, 2013. Security cameras show Vandenburg and other players carrying an unconscious woman out of his car and into an dormitory elevator. They take compromising photos of her and then drag her into his room.

In court, a prosecutor asked the alleged victim, "Did you consent to any of the acts that were done to you?"

"Absolutely not," she said.

"Did you consent to any photographs or videos being taken of you?" the prosecutor asked.

"Absolutely not," she said.

The university stumbled across the footage while investigating a separate incident of vandalism.

School officials questioned the players and contacted police, who say Vandenburg was sending videos to friends in real time and encouraging the assault.

The alleged victim, a 21-year-old neuroscience student who says she was dating Vandenberg at the time, testified she had no memory of the events. She said she only found out what happened when police showed her videos of the attack.

Defense attorneys have blamed alcohol and a campus culture where anything goes.

Several students encountered the woman during the course of the night but failed to step in or report the incident to the university or police.

All four men charged in the incident have pleaded not guilty.