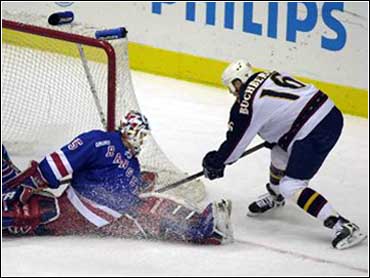 After a miserable start, the highly paid New York Rangers look like they might be worth all that money.

The Rangers spread the scoring around Thursday night, rebounding from a 2-0 deficit to beat the slumping Atlanta Thrashers 6-3 for New York's 11th victory in 15 games heading into the All-Star break.

"Everybody is looking forward to the break," said coach John Muckler, who got goals from six players. "The good thing is, we stuck together and worked hard."

Valeri Kamensky put the Rangers ahead for the first time at 18:57 of the second period, then Alexandre Daigle and Jan Hlavac added insurance goals in the third. Mike Richter, playing for the 34th time in 36 games, turned aside 27 shots.

"I think we're improving," Muckler said. "It's going to be tough. There'll be a lot of close games, a lot of hard-fought games. We'll be competitive every night."

Nelson Emerson scored twice for the Thrashers, but rookie goalie Scott Langkow, just back from the minors, gave up a couple of soft goals as Atlanta's winless streak stretched to a season-high 10 games (0-7-2-1).

Kamensky broke a 3-3 tie with his sixth goal of the season, stuffing in a loose puck that emerged from a scramble behind the net as the second period was winding down. Daigle and Hlavac finished off the Thrashers.

"We played, I will say, very well," said Petr Nedved, who also scored. "When you get three or four lines on the coresheet, that's the stuff that wins games."

The Thrashers, who scored only one goal in each of their previous four games, eclipsed that before the midway point of the first period.

Patrik Stefan skated behind the net and flipped a pass to Emerson in front. Richter stopped the first shot, but Emerson swiped at the rebound, sending a knuckler that grazed the goalie's right arm and plopped into the net at 5:34.

Atlanta built a two-goal lead at 10:08 with the league's 26th-rated power-play unit. Once again, Richter stopped the initial shot, but Ray Ferraro slid in the rebound for his 13th goal.

The Rangers evened the score by the end of the period, however.

Mathieu Schneider scored his sixth goal on a shot from the blue line, using Atlanta defenseman Chris Tamer as a screen and finding a hole between Langkow's legs. The rookie dropped his head in disbelief when he realized the puck had gotten through at 11:29.

Then, after the Thrashers just missed a short-handed goal as Richter made a brilliant split save on Kelly Buchberger's breakaway, Langkow was beaten again.

Nedved, appearing to attempt a pass from a terrible angle in the corner, wound up with his 17th goal instead when the puck struck the goalie and deflected into the net.

"An expansion team is going to make mistakes. That's where I've got to step in and make some saves. Tonight, I didn't," said Langkow, who will spend the All-Star break getting in some extra work at Orlando of the International Hockey League. "Richter played really well. That was the difference."

The Thrashers led 2-0 when play was halted for 11 minutes to repair a shattered panel of glass. The damage occurred when Gord Murphy put a hip check on New York's Radek Dvorak, who tumbled head-first to the ice, his right skate striking the glass.

"We sat around for a while and we started think we were a little bit better than we are," Atlanta coach Curt Fraser said. "We made a few mistakes and seemed to lose our edge."

Richter's save on Buchberger further deflated the Thrashers, especially when the Atlanta player got a poke at the rebound but struck the far post. The red light briefly came on, but the referee waived off the goal and was backed up by the television replay.

The Thrashers grabbed their final lead just 26 seconds into the second period on Emerson's second goal of the game and 11th of the season. After a deflected shot in front, Buchberger tumbled into Richter, allowing Emerson to poke the loose puck into a wide-open net.

The Rangers rallied again with Michael York's 17th goal at 11:05. The rookie center slipped behind the Thrashers defense and stuffed in a cross-ice pass from Adam Graves.
"You can't get into a run-and-gun game with these guys," Atlanta's Ed Ward said. "That's what they want."