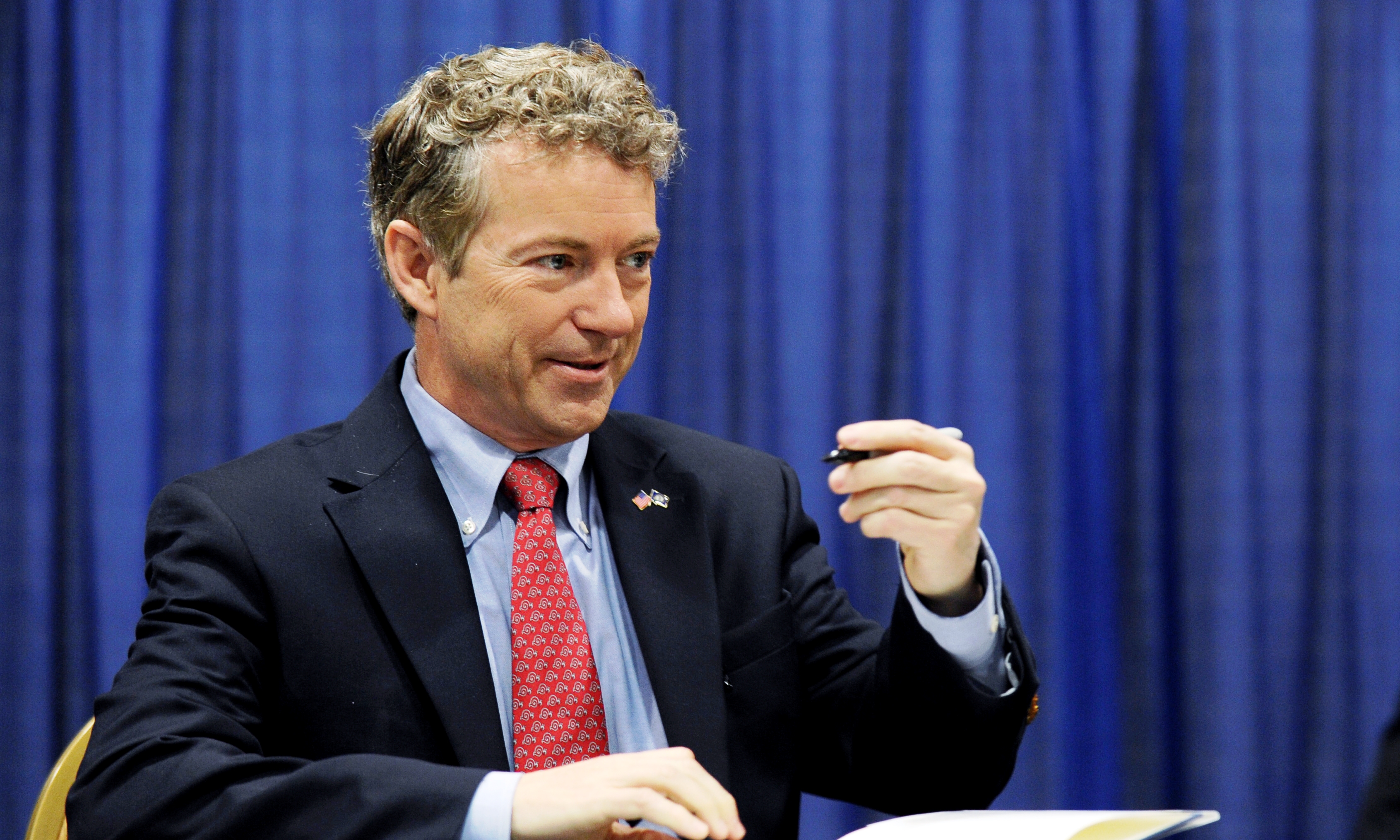 Sen. Rand Paul may not be a foreign policy hawk but he is a political one. He wrote, in a recent critique of his Republican colleagues: "What we don't need right now is politicians who have never seen war talking tough for the sake of their political careers." Incoming! Paul was talking about grandstanding responses to the Ukraine crisis. It wasn't a pinprick attack about a policy disagreement: Sen. Paul is claiming his rivals--ignorant to the sacrifices of war--are too cavalier about committing American troops to foreign conflicts in their rush to make a name for themselves. He made this point in an essay where he also charged these performance hawks with misappropriating Ronald Reagan's legacy, a special desecration in a party where the 40th president is revered. So: ignorant, heartless, self-absorbed, reckless, and distorting history.

Paul's charge against his competition was a solid tremor in the vibrating football game of the 2016 presidential campaign, but it also raised interesting questions about the experience required to be president. Can you only be a legitimate foreign policy hawk if you have fought in a war? If you haven't, and you're behaving like a hawk, does that automatically make you a craven politician? Or does it mean you just have a higher bar to clear for the case you make?

Paul is not the only one to link the issue of sacrifice and hot rhetoric. That was a central message of former Defense Secretary Robert Gates' book: Both parties are too quick to threaten war. It's a fascinating question that should engage us between now and the next presidential election. Paul's words pose a problem for all of the GOP's would-be commanders-in-chief, including himself; his charge undermines his party's foreign policy critique of President Obama, which operates on the blunt formula that if you are not rhetorically tough, you invite global aggression.

It wasn't immediately clear who Paul was attacking. He did not name names, but that may simply have been because he had too many targets. He could have been referring to several of his potential rivals for the presidency. Sen. Ted Cruz told ABC News "I don't agree with him on foreign policy. I think U.S. leadership is critical in the world." New Jersey Gov. Chris Christie has talked about the dangers of the isolationism running through the party (which led to a public spat with Paul months ago.) Sen. Marco Rubio has been staking out the hawkish position as a part of his effort to present himself as the foreign policy voice in the GOP field.

Paul had more advice: "I will remind anyone who thinks we will win elections by trashing previous Republican nominees or holding oneself out as some paragon in the mold of Reagan, that splintering the party is not the route to victory." That was clearly a shot at Cruz, who had criticized Bob Dole, Sen. John McCain, and Mitt Romney in his speech to the Conservative Political Action Conference last week.

Ronald Reagan's 11th commandment reads: "Thou shall not speak ill of a fellow Republican." It is up to the elders of Simi Valley to determine whether an attack so clear in its target but that doesn't actually invoke his target's name is still in keeping with this rule. It's not the first time Paul has employed this loophole. "The GOP of old has grown stale and moss-covered," Paul said last year at CPAC. "I don't think we need to name any names here, do we?" The senator didn't need to name names because it was obvious he was attacking John McCain, a previous Republican nominee with whom he was having a spat at the time.

Paul's central argument is that some Republicans have turned Reagan into a cartoon of hawkishness. So Paul reminded readers of the various times that Reagan had been called an appeaser, like when he negotiated with the Russians, and when he withdrew U.S. troops from Lebanon after the Marine barracks bombing in Beirut that killed 241 Marines. What the critics of the time called weakness was the right approach, Paul argues. (Those signed up for the graduate level seminar will discuss the limits of criticizing others for using Reagan's legacy while simultaneously using Reagan's legacy to bolster your own views.)

By adding the war service element, Paul raises the stakes, arguing that there is a human cost to witless hawkishness. Usually when a candidate talks about service it is to champion his own. Paul doesn't have military service he can invoke, but he can use the lack of military credentials among his rivals to launch a preemptive attack on them--and diminish their ability to criticize him. (More graduate study: Reagan never "saw war" (except in the movies) and neither did FDR, so what does that say about the relationship between service and foreign policy excellence?)

Paul's charge arrives at a moment of flux in American foreign policy. The question of whether a president's posture invites aggression from other countries is open for general discussion again in a way it was not during the Bush years and in their aftermath. Barack Obama won the 2008 presidential campaign in part because voters thought the previous administration was too concerned with appearing tough. But now, only 39 percent of the country approve of the way the president is handling foreign policy, according to the recent CBS/New York Times poll. The Washington Post says Obama's foreign policy "is based on fantasy."

The Republican critique of President Obama operates on a simple switch. He is weak, which invites peril. Condoleezza Rice, for example, argued recently that Obama's weakness invited Russian aggression. Paul is also a target of this critique. At CPAC, former U.N. ambassador John Bolton said that while isolationists came to their ideology by a different route than the feckless Barack Obama, the views were effectively the same.

There are specific ways in which the president may appear weak--his fishtailing Syria policy is a good example--but the critique doesn't rely on specifics. It simply relies on Obama being in office while bad things are happening in the world. If he were strong, goes the critique, these things wouldn't be happening. Paul would sign up to parts of the general Republican critique, but by attacking the chest thumping as the product of political opportunism, it's hard to then argue that what also sounds like chest thumping is sometimes valid and not craven.

Perhaps even less helpful to Republicans is that Paul's argument would seem to offer aid and comfort to Hillary Clinton. She, above all likely 2016 candidates, has had actual experience with the topics of war and peace. That's part of what gives the Benghazi attacks their potency. She was in a position of responsibility when one of her ambassadors died in a terrorist attack. But if Paul is claiming that seeing war gives you some special insight, she has seen its costs from a closer perspective than anyone in the Republican field. It would be cleaner for Republicans if the Obama team, including Clinton, could just be labeled weak.

Rand Paul is calling for a more reasoned and fact-based discussion of foreign policy; he is asking people to assess whether the people taking hawkish positions have the standing to take those positions. This is the way we should all want to talk about foreign policy in a presidential campaign, but it bares little resemblance to the way that it is is discussed. In a campaign, the conversation is reductionist and appeals to emotion. The current tussle with Russia offers a good example. Mitt Romney had a view about the global threat posed by the Russians. It might have been wrong and it might have been right. It looks more right every day. President Obama didn't engage with the argument, but dismissed it with a smug and self-satisfied quip, a blunt reply intended to call in to question Romney's entire worldview. Like Paul, the president may not be a hawk, but he knew how to attack when it came to politics.