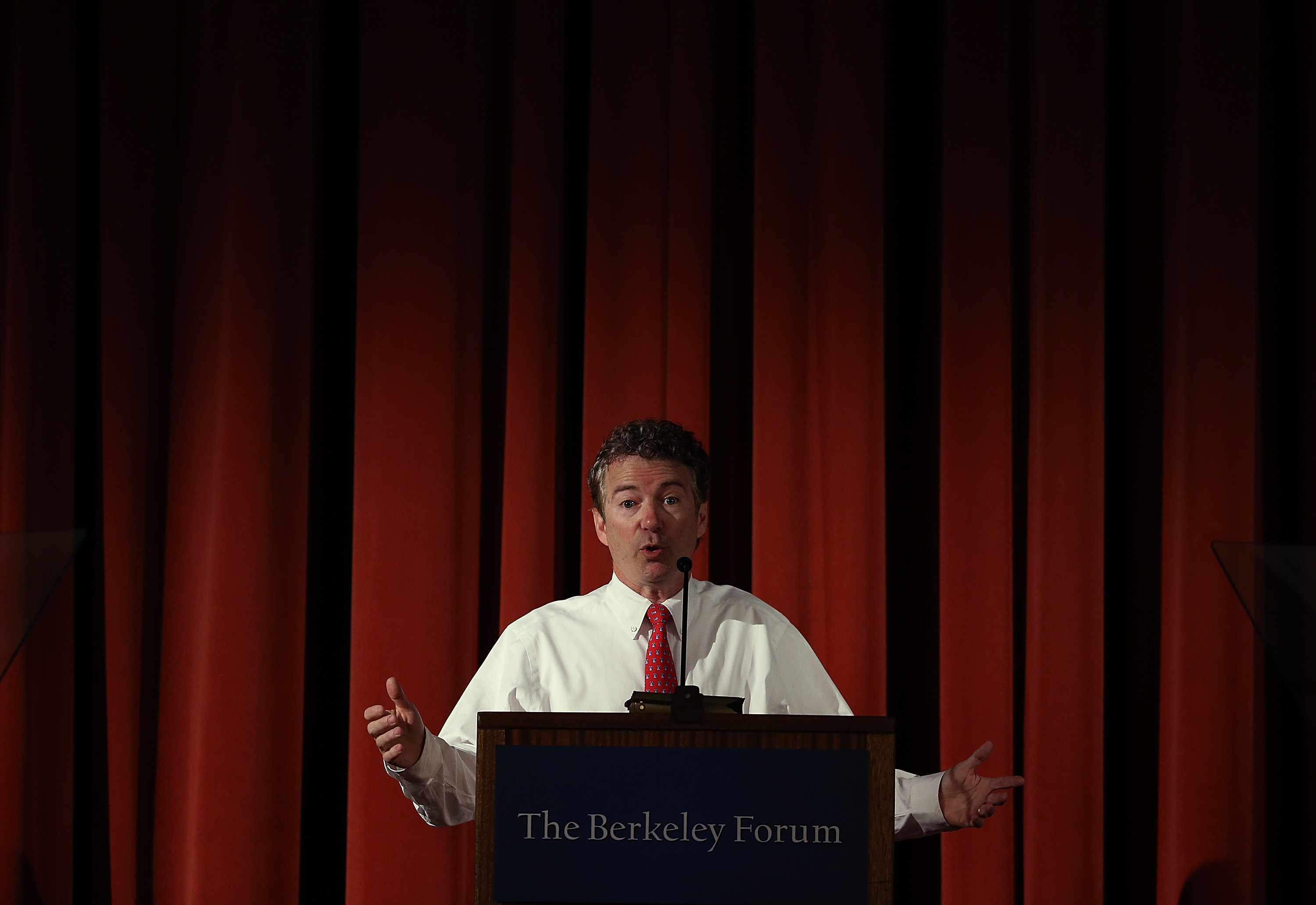 Railing against government surveillance practices, Sen. Rand Paul, R-Ky., lit up a crowd at the famously liberal University of California, Berekley, on Wednesday.

Paul, among the intelligence community's most persistent critics since several far-reaching surveillance programs were thrust into the spotlight last June, said he's deeply troubled by recent charges that the CIA spied on Congress

"I don't know about you, but I'm worried," the Kentucky Republican said, according to the San Francisco Chronicle. "If the CIA is spying on Congress, who exactly can or will stop them?"

Last week, Sen. Dianne Feinstein, D-Calif., took to the Senate floor to deliver a blistering rebuke of the CIA, which she accused of illegally spying on members and staff of the Senate Intelligence Committee as that panel was probing the agency's controversial use of enhanced interrogation techniques.

Since Feinstein's speech, Paul said, "I look into the eyes of senators and I think I see real fear...I think I perceive fear of an intelligence community drunk with power, unrepentant and uninclined to relinquish power."

Paul called for the formation of a "bipartisan, independent" select committee with full investigative authority to probe Feinstein's accusation and other potential spying abuses.

Paul also said he finds it "ironic" that President Obama, America's first black president, would be comfortable overseeing such a vast surveillance apparatus, given the government's history of spying on civil rights leaders.

Citing former FBI Director J. Edgar Hoover's surveillance of Dr. Martin Luther King, Jr., during the height of the civil disobedience of the 1960s, Paul said, "If President Obama were here, he would say he's not J. Edgar Hoover, which is certainly true. But power must be restrained because no one knows who will next hold that power."

Much of Paul's address to the mostly college-aged audience at Berkeley focused on his opposition to the government's spying - a message that Paul hopes could make inroads with younger voters that tend to tilt away from Republicans.

"I believe what you do on your cellphone is none of their damn business," Paul said, brandishing his own phone as the audience's perpetually plugged-in youth applauded.

But he also stressed the need for a broader renaissance within the GOP, saying his party must "evolve, adapt or die."

"Remember when Domino's finally admitted they had bad crust?" he asked. "We need a different type of party."

Paul has become something of a canary in the coalmine recently, urging Republicans to change their tune on a variety of topics - immigration, social issues, national security - before it's too late.

In an interview last week, Paul counseled Republicans to mute the culture war if they hope to attract younger voters. "I think that the Republican Party, in order to get bigger, will have to agree to disagree on social issues," he told vocativ.com. "The Republican Party is not going to give up on having quite a few people who do believe in traditional marriage. But the Republican Party also has to find a place for young people and others who don't want to be festooned by those issues."

For now, at least, the reformer's message seems to be serving Paul well: He recently topped the straw poll of presidential contenders at the Conservative Political Action Conference, and at least one national poll, from CNN/ORC International, shows him narrowly edging out his potential rivals in the 2016 GOP presidential primary.

"I don't know whether it's good luck or it's bad luck," he told National Journal of his moment in the sun. "It makes you more of a target, I guess."