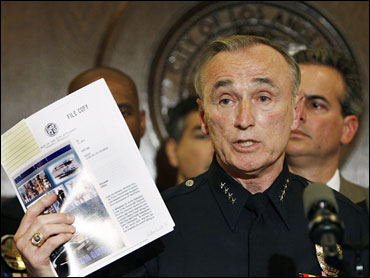 The highest ranking police official at the scene of a violent clash between officers and people at an immigration rally was demoted Monday, and his second-in-command was transferred.

Deputy Chief Cayler "Lee" Carter Jr., commanding officer of the operations central bureau, was demoted to commander and ordered to work from home. Cmdr. Louis Gray was moved to a post where he will have less authority.

Police Chief William Bratton announced the changes at a news conference along with Mayor Antonio Villaraigosa and the president of the city's civilian police commission, John Mack.

"I have to be comfortable with the leadership around me," Bratton said, declining to state the specific reasons for the moves.

Police were videotaped using batons and firing rubber bullets at demonstrators and journalists gathered in a park after an otherwise peaceful march for immigration reform on May 1. Bratton said a group of agitators threw rocks and bottles at officers wearing riot gear. The melee is the focus of four separate investigations.

Carter has been in the department for more than three decades and was responsible for deployment of 1,700 officers serving more than 1 million residents in an area the size of Washington, D.C., according to the department's Web site.

Gray joined the force 39 years ago. A statement attributed to him on the Web site said he is a "strong supporter" of community policing.

"Forming partnerships with the community and solving problems together is the best way to combat crime and improve the quality of life for all persons who live and work in the City of Los Angeles," he said.

The department's leaders have faced intense public criticism over the years for failing to take action after reports of police brutality. The local American Civil Liberties Union branch has stood by its endorsement of a second five-year term for Bratton, however.

Villaraigosa shortened a trade mission to Central America and returned to town Friday after criticism for being away during a swelling crisis.