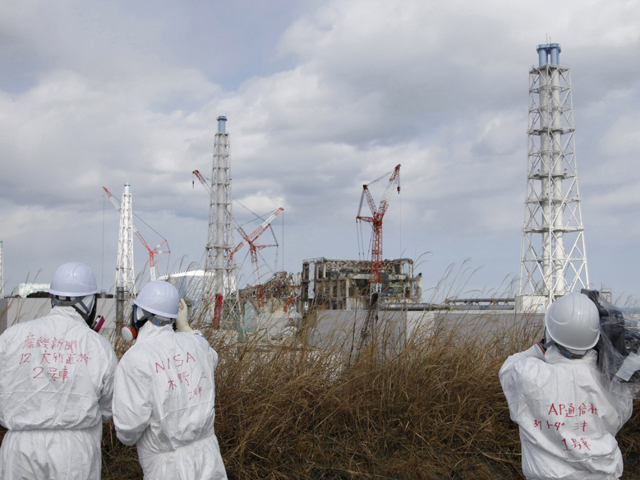 SALT LAKE CITY - Radioactive contamination from the Fukushima power plant disaster has been detected as far as almost 400 miles off Japan in the Pacific Ocean, with water showing readings of up to 1,000 times more than prior levels, scientists reported Tuesday.

But those results for the substance cesium-137 are far below the levels that are generally considered harmful, either to marine animals or people who eat seafood, said Ken Buesseler of the Woods Hole Oceanographic Institution in Massachusetts.

He spoke Tuesday in Salt Lake City at the annual Ocean Sciences Meeting, attended by more than 4,000 researchers this week.

The results are for water samples taken in June, about three months after the power plant disaster, Buesseler said. In addition to thousands of water samples, researchers also sampled fish and plankton and found cesium-137 levels well below the legal health limit.

"We're not over the hump" yet in terms of radioactive contamination of the ocean because of continued leakage from the plant, Buesseler said in an interview before Tuesday's talk. He was chief scientist for the cruise that collected the data.

The ship sampled water from about 20 miles to about 400 miles off the coast east of the Fukushima plant. Concentrations of cesium-137 throughout that range were 10 to 1,000 times normal, but they were about one-tenth the levels generally considered harmful, Buesseler said.

Cesium-137 wasn't the only radioactive substance released from the plant, but it's of particular concern because of its long persistence in the environment. Its half-life is 30 years.

The highest readings last June were not always from locations closest to the Fukushima plant, Buesseler said. That's because swirling ocean currents formed concentrations of the material, he said.

Most of the cesium-137 detected during the voyage probably entered the ocean from water discharges, rather than atmospheric fallout, he added.

Hartmut Nies, of the International Atomic Energy Agency, said Buesseler's findings were not surprising, given the vastness of the ocean and its ability to absorb and dilute materials.

"This is what we predicted," Nies said after Buesseler presented his research.

Nies said the water's cesium-137 concentration has been so diluted that just 20 miles offshore, "if it was not seawater, you could drink it without any problems."

"This is good news," he said, adding that scientists expect levels to continue to decrease over time.

"We still don't have a full picture," Nies said, "but we can expect the situation will not become worse."