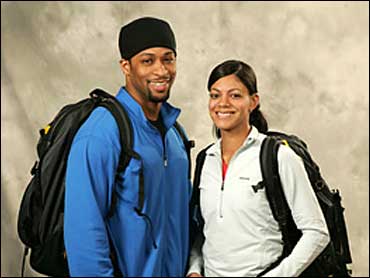 Things are getting tense among the remaining teams in "The Amazing Race 9."

Ray and Yolanda finally came out on top in a leg, in the episode that aired Wednesday night, which revealed the simmering tensions as the teams battled it out in Australia for the second week in a row.

And BJ and Tyler can certainly attest that timing is everything: They finished last for a second time, only to be saved, as they were the first time, by doing it in a stretch that turned out to be a non-elimination round.

Yolanda Brown-Moore, 27, is a teacher who lives in Chicago. Ray Whitty, 31, is a lawyer who also lives in the Windy City. Both grew up in Florida. The teammates are dating.

According to the show's official Web site:

"As Teams headed north to Darwin, Australia, the simmering feud between BJ & Tyler and Joseph & Monica heated up after the best friends Yielded the dating couple as promised. Meanwhile, Ray & Yolanda ran a great leg to snag their first victory, while a three Team sprint to the mat resulted in a karmic payback for MoJo as they finished three steps ahead of last place BJ & Tyler who survived because of another non-elimination leg.

… As the three Teams pulled into the Lake Bennett Resort, they all prepared for the mad dash that would ensue. A concerned Monica didn't think she could beat BJ & Tyler in a footrace, but Joseph encouraged her, saying, "Just get out and run as hard as you can." Tearing out of their cars, Monica trailed behind the five guys as everyone frantically ran to where Phil stood on the mat. Just when it appeared that Joseph & Monica would finish in last place, BJ made a tactical mistake by running on rocks instead of the bridge, thinking it would be a shortcut. After Eric & Jeremy claimed second place, Joseph and Tyler stepped on the mat together and, because of BJ's mistake, Monica snuck onto the mat three steps ahead of BJ. A thrilled Joseph shouted, "We got here before you! You Yielded us!" Once again, BJ & Tyler survived last place with this being a non-elimination leg, but the next leg would be more challenging, as BJ had no pants or shoes. Regarding the potentially dire situation, an optimistic BJ commented, "It's like shedding our cocoon and metamorphosizing into the butterflies that are going to win this Race."

On the mat, the Teams addressed the growing tension that has arisen in the past few legs. Monica said, "We're not playing this game by playing mind games and starting rumors about people. That's not the way we play the game by being nasty." After BJ insisted they aren't playing mind games, Joseph later said, "We definitely want to drive them in the ground."

The Early Show and Travelocity can make you the star of your own reality trip, giving you and a friend the chance to visit this season's "Amazing Race" destinations. To enter the "Around the World With The Amazing Race" contest, click here.