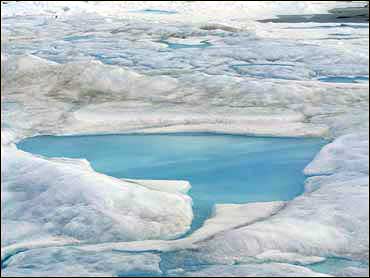 Canada's prime minister announced plans Friday for an army training center and a deepwater port on the third day of an Arctic trip meant to assert sovereignty over a region, while Denmark said it was staking its own claim with a scientific expedition.

The United States, meanwhile, launched an expedition Friday toward the Arctic to map the sea floor off Alaska, but a scientist linked to the project denied the U.S. was actively joining the Arctic competition.

The race to secure subsurface rights to the Arctic seabed heated up when Russia sent two small submarines to plant a tiny national flag under the North Pole last week. The United States and Norway also have competing claims in the vast Arctic region, where a U.S. study suggests as much as 25 percent of the world's undiscovered oil and gas could be hidden.

Prime Minister Stephen Harper's three-day trip to the Canadian Arctic had been planned for months. But it has taken on added significance since the Russian flag-planting, which Canada and the U.S. promptly dismissed as legally meaningless.

Harper, speaking from the territory of Nunavut, said the new military installations would help back up Canada's claim to the waters and natural resources of the Northwest Passage, which runs below the North Pole from the Atlantic to the Pacific through the Arctic archipelago.

The United States has said the passage is neutral territory.

"Canada's new government understands that the first principle of Arctic sovereignty is: Use it or lose it," Harper said from a storage shed protecting him from howling winds on a barren, rock-strewn highland in Resolute Bay, where the temperature was 35 degrees.

"Today's announcements tell the world that Canada has a real, growing, long-term presence in the Arctic," he added, flanked by rifle-toting members of the Canadian Rangers, an Inuit volunteer force.

Resolute Bay, about 370 miles south of the North Pole, will be home to a new army training center for cold-weather fighting that will house up to 100 military personnel. The new deep-sea port will be built for navy and civilian purposes on the north end of Baffin Island.

The U.S. project has been in the works and isn't an effort to lay claims, according to Larry Mayer, director of the Center for Coastal and Ocean Mapping at the University of New Hampshire.

"We're basically just doing science," said Mayer. "We've had this trip planned for months, and it has nothing to do with the Russians planting their flag."

The purpose of the mapping work aboard the Coast Guard icebreaker Healy is to determine the extent of the continental shelf north of Alaska, Mayer said. It's not a claim, he said, but a process of registering boundary information with the U.N. Commission on the Limits of the Continental Shelf.

Global warming has raised the stakes in the scramble for sovereignty in the Arctic because shrinking polar ice could someday open up resource development and new shipping lanes.

Denmark said scientists would embark Sunday on a month long expedition seeking evidence that the Lomonosov Ridge, a 1,240-mile underwater mountain range, is attached to the Danish territory of Greenland, making it a geological extension of the Arctic island.

That might allow the Nordic nation to stake a claim under a U.N. treaty that could stretch all the way the North Pole. Canada and Russia also claim the ridge.

"The preliminary investigations done so far are very promising," Helge Sander, Denmark's minister of science, technology and innovation told Denmark's TV2 on Thursday. "There are things suggesting that Denmark could be given the North Pole."

The Danes plan to set off from Norway's remote Arctic islands of Svalbard aboard the Swedish icebreaker Oden, which will be assisted by a powerful Russian nuclear icebreaker to plow through ice as thick as 16 feet in the area north of Greenland.

"No one has ever sailed in that area. Ships have sailed on the edges of the ice but no one has been in there," the expedition leader, Christian Marcussen, said in Copenhagen. "The challenge for us will be the ice."

The team includes 40 scientists, 10 of them Danish, and the crews of the icebreakers, which will use sophisticated equipment, including sonar, to map the seabed under the ice.

Moscow claims the Lomonosov ridge is an extension of the Eurasian continent, and therefore part of Russia's continental shelf under international law. Russian researchers plan to use last week's dive to help map the ridge.

Canada and Denmark also both claim Hans Island, a half-square-mile rock at the entrance to the Northwest Passage. The island is wedged between Canada's Ellesmere Island and Danish-ruled Greenland, and has been a subject of bitter exchanges between the two NATO allies.

In 1984, Denmark's minister for Greenland affairs, Tom Hoeyem, caused a stir when he flew in on a chartered helicopter, raised a Danish flag on the island, buried a bottle of brandy at the base of the flagpole and left a note saying: "Welcome to the Danish island."

Last month, Harper announced that six to eight new navy patrol ships would be built to guard the Northwest Passage sea route in the Arctic

As global warming melts the passage — which is navigable only during a slim window in the summer — the waters are exposing unexplored resources, and becoming an attractive shipping route. Commercial ships can shave off some 2,480 miles from Europe to Asia compared with the current routes through the Panama Canal.