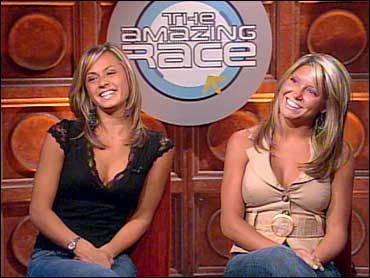 The brash New Yorkers nicknamed "The Pinkies" and the "Double D's," who got the boot from "The Amazing Race 9" in Tuesday night's episode, say they were misled by Lake and Michelle.

Childhood friends and recent college grads Dani Torchio and Danielle Turner, both 22 and from the New York City borough of Staten Island, pulled up the rear as the eight remaining teams ventured from Germany to Italy.

According to the show's official Web site: "A computer made all the difference for best friends BJ & Tyler, who kept their lead throughout the leg after being the only Team to book tickets online on the earliest flight to Palermo, Italy. When a ticketing mistake put married parents Lake & Michelle in last place, they managed to pull ahead of childhood friends Danielle & Dani just long enough to Yield them. The Yield allowed dating couple Ray & Yolanda to pass Danielle & Dani, who became the fourth Team eliminated from the race.

Indeed, the pair had been eliminated from "The Amazing Race." On the experience, Dani said: "We've learned more in the race than people learn in a lifetime about themselves. We definitely have strong minds and big hearts. We're the Double D's from New York."

On The Early Show Wednesday, Dani co-anchor Julie Chen participating in the race "definitely made our friendship stronger. I think we look at each other with a different respect right now, and a different level. Danielle definitely helped me through some times that were really stressful."

Danielle said it worked both ways: "I never thought I'd break down as much as I did toward the end. And she was so good, making me feel better about it."

What's next for them?

"We've always wanted to do something in television or entertainment, so maybe this is our steppingstone," Danielle suggested.

"At the end of everything, there's definitely something new!" Dani concluded.