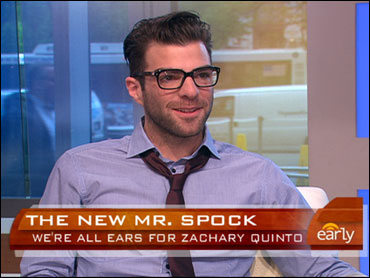 The "Star Trek" franchise continues to live long and prosper as a relaunch of the series finally makes it's way to theaters tomorrow.

As the crew warps aboard the USS Enterprise, Zachary Quinto steps into the role of Mr. Spock.

Quinto sat down with Early Show co-anchor Harry Smith to talk about his latest adventure.

Deciding to take on the role was a challenge because it could have gone either way - as the greatest idea of all time, or an absolute disaster.

"I think you walk the line for a minute when you're deciding about something like this," Quinto said. "But J.J., I mean, come on, you know. The only disasters that he's a part of are the ones that he creates. These epic stories. I think he's amazing. I think he's such a visionary."

Quinto says "Star Trek" director, J.J. Abrams, really drew him in more than anything else and he was fascinated by this character as well.

He admits that he wasn't a "Trekkie" as a kid.

"I wasn't. I was aware of it, but I wasn't really that immersed in it," he admitted. "I came up during the 'Star Wars' generation and that was sort of the thing I plugged into much more.

"It was a little before my time and I think it was sort of grappling with these intellectual ideas that were a little advanced for my young mind. At the time. But now I have a much deeper appreciation for it."

The movie, which delves into the back story of Spock, is getting phenomenal notice.

"It's really an origin story for all of the characters, I think. And I know as an audience member, that's always been really gratifying for me to see over the years different experiences, different versions of characters that you know," Quinto explained.

The Early Show caught up with Leonard Nimoy, who also has an impressive role in the movie as well.

"Zachary Quinto is a talented, great guy. I'm very proud of him. I think he's great in this movie," Nimoy said.

Quinto, who called Nimoy "the coolest man in so many ways," says that one of the biggest gifts he received from this experience has been getting to know him.

"He's incredible, very smart and full of life," he said. "Traveling all over the world all the time, every time I talk to him he's going to Greece to buy art - like this life that he's cultivated for himself is very impressive."

As Quinto embarks on this journey, he has realized the magnitude of the "Star Trek" culture.

"It comes with this whole history," he said.

"When they make the next one, which they will, and if you decide to do it, we'll have a very interesting conversation about what the journey has been like," Smith said.

"I know we will. Because you know for me it's been evolving for such a long time," Quinto said. "We shot the movie a year-and-a-half ago and now it's finally sort of able to be shared with the audience. So it's a really great time. We will continue our converasation."