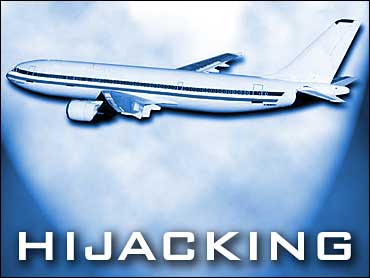 Hijackers forced a plane carrying about 70 Eritreans from Libya to land in the Sudanese capital on Friday before surrendering to security forces, according to a U.N. refugee agency official.

"We know the hijacking is over because they surrendered to authorities," Lindenbauer told The Associated Press in Egypt during a telephone interview.

The plane landed at a Khartoum airport at about 2 p.m. and the hijacking ended soon after, said Lindenbauer before interviewing the Eritreans to determine their situations, particularly if they were deportees.

Tarek Abu Saleh, a Sudanese Foreign Ministry official who was at the airport at the time, said 20 Eritreans aboard a Libyan aircraft allegedly threatened the crew and forced it to land at Khartoum. He said one crew member was slightly injured.

He said the 20 suspected hijackers were now in Sudanese custody and the plane has departed. He had no other details.

Abu Saleh was at the airport to escort U.S. political activist Jesse Jackson on a fact-finding mission to Darfur, the region in Western Sudan where Arab militants, possibly supported by the government, have killed an estimated 30,000 African farmers. Western governments have been pressing Sudan to rein in the militias, called janjaweed.

The conflict between black African and Arab peoples in the west has heated up even as the lengthy civil war in Sudan cools. That war has pitted Muslims from the north against non-Muslims in the south.