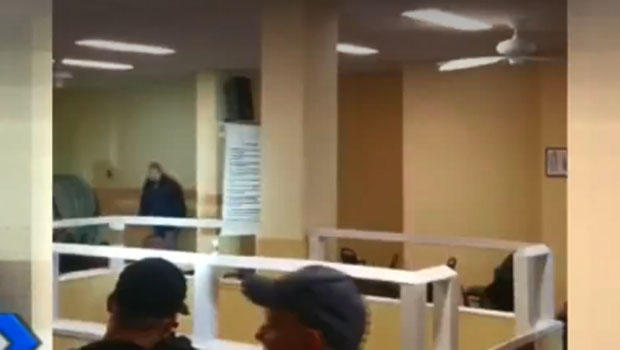 PORTLAND, Ore. -- Groups and family members are raising questions about whether officers resorted to deadly force too quickly when they shot and killed a man inside a Portland, Oregon, homeless shelter who was wanted for a carjacking. Bystander video posted on social media shows officers firing rounds not long after entering the shelter with guns drawn Saturday.

The video was obtained by CBS Portland affiliate KOIN.

Witnesses said the suspect had a knife. The man appears to have his arms at his sides as almost a dozen officers stand with guns and rifles drawn. The video shows him across the room from officers before he appears to move closer to them, though it's not clear why and a barrier partially obscures the view. They open fire, and the man falls to the floor.

"In less than a minute, officers shoot and kill the man, while members of an already traumatized population, Portland's homeless community, watch in horror," David Rogers, executive director of the American Civil Liberties Union of Oregon, said in a statement Sunday night. "Was there any attempt to de-escalate the situation before officers open fire inside the homeless shelter full of innocent bystanders? If not, why not?"

Police have not identified the suspect, but David Elifritz tells The Oregonian/OregonLive it was his brother, 48-year-old John Elefritz. He questions why police didn't use a stun gun on his brother.

"You see the video and you think cops are supposed to be trained to handle this," Elifritz said. "There's quite a space between him and the officers."

Portland is among the West Coast cities struggling to cope with a rising tide of homelessness, and its police agency has been criticized for fatal shootings and other deaths at the hands of officers. A 2012 government investigation found that officers engaged in a pattern of excessive force against people who are mentally ill.

Police have not identified the man killed this weekend, but the shelter's executive director, Mike Giering, said he has no known connection to the facility. An Alcoholics Anonymous meeting had just begun at the time of the shooting, Giering said.

Elefritz went into the shelter after allegedly crashing a stolen car. Witnesses said he had a knife. Police spokesperson Sgt. Chris Burley said it has not yet been determined if he had a weapon at the time of the shooting, the newspaper reported. Police have not yet disclosed what prompted officers to shoot.

The suspect was pronounced dead at the scene. No officers or bystanders were injured.

A few witnesses to the shooting told the newspaper that the man had gone into the shelter and was slashing and stabbing himself with a knife before lunging at officers.

"We were all scared for our lives," said Morgan Thomas Pickering, of Portland. He said the scene was "horrific" and the man was acting erratically.

David Abbs, who is homeless and was inside the shelter during the shooting, said the man entered a common-room area wearing no shirt or jacket.

He riffled through a donation bin, put on a jacket and went back outside, said Abbs, who stays at the shelter and did not recognize the man. When he returned, he was holding a knife, he said.

The man peered anxiously through the window and then cut his throat and one wrist with the knife, said Abbs, 63, although he does not recall seeing any blood.

"He said, 'Stay away' and he was looking outside," he said.

"I looked by the door and there were two cops standing there with their bean bag guns and (they) shot him twice and knocked him down."

The man got up and ran to the back of the room, near the entrance to the shelter kitchen, Abbs said.

About 10 more officers then rushed into the shelter with a police dog. Abbs could no longer see because he uses a wheelchair and the officers blocked his view, but he heard eight gunshots.

"One of the cops told me I should come outside," he said. "They told me to go outside."

Portland Police Chief Danielle Outlaw and Mayor Ted Wheeler have asked the public to withhold judgment until after the investigation is over.

"Already, there are those who want to immediately define what happened," Wheeler said. "It would be highly irresponsible for me to participate in speculation at this time. I urge us all to allow investigators to do their work, to uncover the facts, and to report on their findings."

Chief Danielle Outlaw said in a statement that she was aware of a video taken of the incident and posted on the Internet, and asked the public to "please be reminded that deadly force investigations are extremely complex and take time."

Police said they would release the identities of the officers involved in the shooting on Sunday; as of Monday afternoon, their names had not yet been made public. Per policy, the involved officers will remain on paid administrative leave until the completion of the investigation.

"The Portland Police Bureau values human life and accepts the authority to use lethal force with great reverence," Outlaw said. "The Police Bureau is committed to transparency and will ensure the entire investigation is released in a timely manner that does not impact the integrity of the investigation."