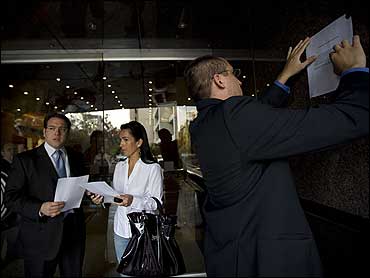 While R. Allen Stanford's investors were swallowing claims of vast returns on safe investments, some of his employees were not so sure.

And though one of them tried as early as 2003 to pass on to regulators his concerns about the bank, nothing came of it until Stanford's operations were raided and shut down Tuesday.

The Texas billionaire, with a reputation for jet-setting and lavish spending, was tracked down Thursday in Virginia, where FBI agents served him with legal papers in a multibillion-dollar fraud case that has left thousands of clients trying to get access to their money. And while sources say Stanford was "extremely cooperative" with investigators, he still faces civil charges for allegedly lying about his investment strategy.

But in 2003, when his offshore banking empire was exploding in size, even asking managers one question too many could get you fired, Miami broker Charles Hazlett said.

Hazlett was a top performer at Stanford's bank, having sold $10 million in certificates of deposit in a single quarter of 2002. The company rewarded him with a new BMW.

But when a client asked Hazlett for details about the investments, no one at the bank would give him even basic information about risk ratings and asset allocation, he said in an interview.

Eventually, Hazlett said, he called a meeting with a top officer of the bank to ask how the investments worked. Instead of answers, he got an ultimatum: Resign or be fired.

"I kind of peaked when I won the car and was doing great, but as soon as I started questioning things at the bank, they were setting up to let me go," Hazlett said.

It wasn't just promises to investors of earning twice the normal rates on certificates of deposit that fed his suspicions, Hazlett said. The company also lacked detailed balance sheets. And it used a small and little-known accounting firm.

The Securities and Exchange Commission has been criticized for missing the same red flag - a tiny accounting firm - when investigating Bernard Madoff, who allegedly ran a $50 billion pyramid scheme for years despite the SEC's receiving numerous tips about him.

Hazlett said he repeated his concerns during an arbitration hearing over his departure from Stanford and believed regulators would follow up on them.

"I figured it was a matter of time before people figured things out," he said.

But Hazlett said he never called officials directly because he didn't have any proof of wrongdoing - just a sense of being stonewalled.

It turned out Hazlett wasn't the only employee who wanted to know more about Stanford's portfolio.

Even the man responsible for selling multimillion dollar CDs and overseeing the bank's investments said he was rebuffed when he asked where the money was, court records show.

Zarich said he was trained to deflect questions about the investment strategy while pitching to wealthy clients in Antigua, where the bank chartered.

His tutor on the evasive pitch was Stanford chief financial officer Laura Pendergest-Holt, Zarich said. He said she laid out the strategy in a series of training sessions in Memphis in 2005, according to court documents.

"I was trained not to divulge too much information, but it just wouldn't leave an investor with a lot of confidence," he said in a Feb. 4 meeting with SEC lawyers.

Clients would "just push, push, push," he told the lawyers. "'Give me an actual security. Give me something,'" he said they demanded.

But when he tried to learn how the money was invested, Pendergest-Holt and Stanford's deputy James Davis turned him away, Zarich said.

Pendergest-Holt and Davis are among those charged in the civil complaint.

Another lower-level employee in Texas said he and his colleagues were suspicious of the company's rapid growth and web of overseas ties. He spoke on condition of anonymity because he still works in the industry.

In fact, the only two people who knew where the money was were Stanford and Davis, Stanford's former college roommate, the SEC alleged in a civil complaint filed Tuesday.

Zarich said Pendergest-Holt also armed him with answers for potential investors worried about the size of Stanford's tiny, Antigua-based auditor. Zarich assured investors that CAS Hewlett had been working with Stanford and his father since 25 years earlier, when major accounting firms "wouldn't even give Stanford the time of day."

If that didn't work, he said, he told clients that using a name-brand firm "would erode the yields."

Zarich is cooperating with the investigation, his lawyer said in a statement.

Meanwhile, Caribbean regulators have taken control of an Antiguan bank owned by Stanford.

The Eastern Caribbean Central Bank says it acted to stop a run on deposits at the Bank of Antigua after the fraud charges were filed against Stanford in the United States over the operations of a separate entity in Antigua, the Stanford International Bank.

Central Bank Governor Dwight Venner said Friday that the local bank's directors requested the takeover amid concern the bank could fail and disrupt the economy of the twin-island nation of Antigua and Barbuda.