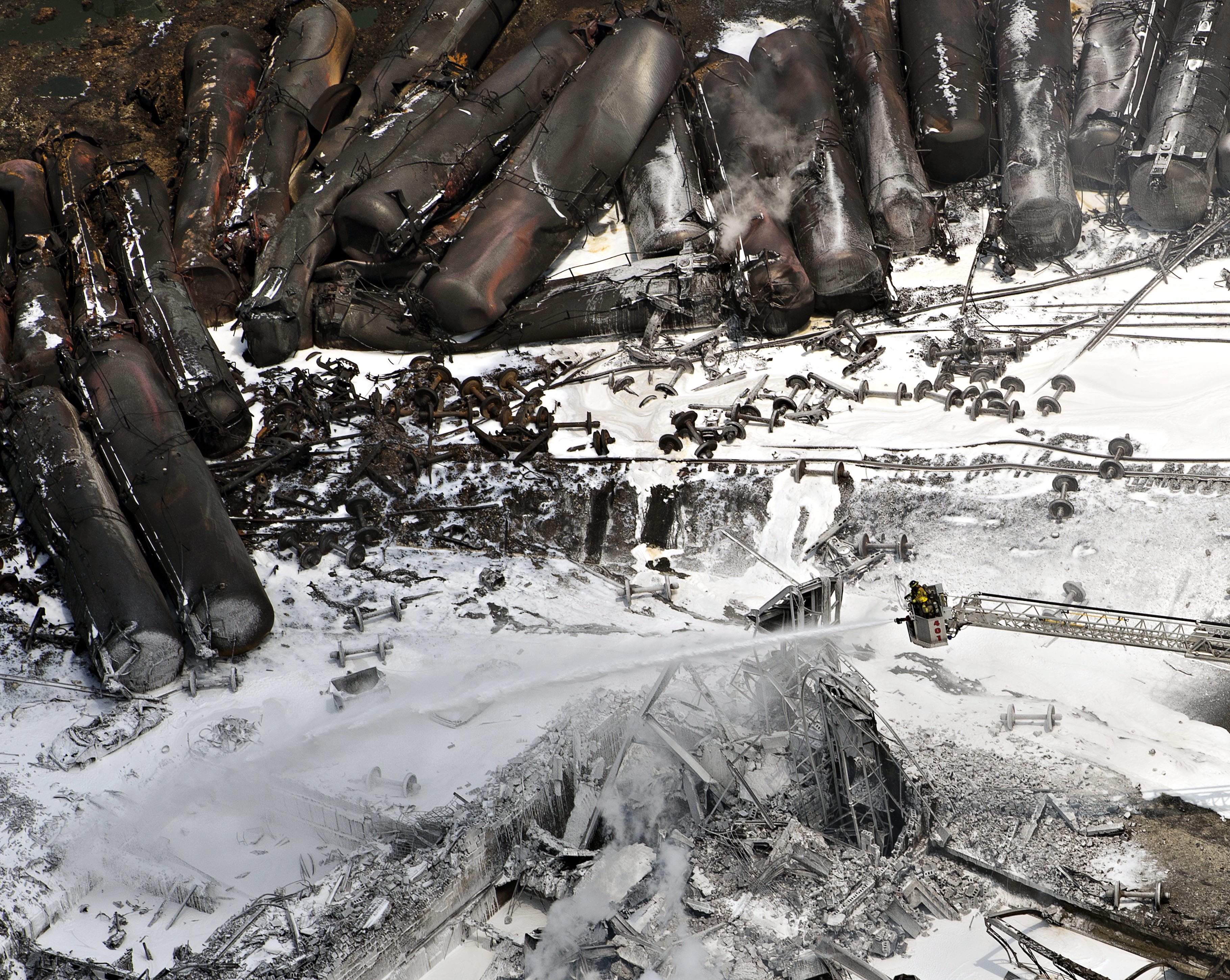 LAC-MEGANTIC, Quebec Traumatized survivors of an oil train derailment that wiped out the heart of a small town braced for more bad news as inspectors were finally cleared to enter the charred site's epicenter and look for remains late Monday, more than two days after the disaster that killed at least 13 people. At least 37 were missing and the death toll was sure to rise.

Quebec provincial police Sgt. Benoit Richard said eight more bodies had been found in the wreckage after firefighters doused the flames and cooled down some of the oil tankers that were in danger of exploding. Five bodies were found over the weekend, and police would not say where the newly discovered ones were, for fear of upsetting families.

All but one of the train's 73 tanker cars were carrying oil when they came loose early Saturday, sped downhill nearly seven miles into the town of Lac-Megantic, near the Maine border, and derailed. At least five of the cars exploded.

Although officials are still investigating what may have caused the train to derail, investigators have been eyeing faulty breaks and failed tankers.

The lead Transportation Safety Board investigator, Donald Ross, told The Associated Press Monday the train's DOT-111 rail tankers have a history of puncturing during accidents.

"It's too early to tell. There's a lot of factors involved," Ross said. "There's a lot of energy here. The train came down on a fairly significant grade for 6.8 miles before it came into the town and did all the destruction it did." He said the train was moving at 63 mph when it derailed.

Additionally, the train's owners said they believed brake failure was to blame. "Somehow those brakes were released, and that's what is going to be investigated," Joe McGonigle, Montreal, Maine & Atlantic Railway's vice president of marketing, told The Associated Press on Sunday.

For residents of Lac-Magantic, the derailed train was a frightening sight. Maude Verrault, a waitress at downtown's Musi-Cafe, was outside smoking when she spotted the blazing train barreling toward her.

"I've never seen a train moving so fast in my life, and I saw flames ... Then someone screamed 'the train is going to derail!' and that's when I ran," Verrault said. She said she felt the heat scorch her back as she ran from the explosion, but was too terrified to look back.

The blasts destroyed about 30 buildings, including a public library and Musi-Cafe, a popular bar that was filled with revelers, and forced about a third of the town's 6,000 residents from their homes. Much of the area where the bar once stood was burned to the ground. Burned-out car frames dotted the landscape.

Sophie L'Heureux, a manager at Musi-Cafe, was woken up at home by the explosion. She said she believed there were about 50 people in the bar, including many close friends.

"I'm in survival mode right now. My priority is to try sleep if I can, eat if I can," she said. "For the rest, it's one minute, one day at a time."

Mike Armstrong, a correspondent with Global TV, told "CBS Evening News" anchor Scott Pelley the incidents as ecological disaster as well. The nearly 27,000 gallons of light crude oil from the train spilled into the Claudiere River, which feeds into the larger St. Lawrence River.

"Ten communities have been told to be careful about their drinking water," Armstrong reports. "This river for a while is basically dead."

The derailment raised questions about the safety of Canada's growing practice of transporting oil by train, and was sure to bolster arguments that a proposed oil pipeline running from Canada across the U.S. -- one that Canadian officials badly want -- would be safer.

Raymond Lafontaine, who believed he lost three members of his family, including his son, said he was angry with what appeared to be lack of safety regulations.

"We always wait until there's a big accident to change things," said Raymond Lafontaine, who had three missing relatives. "Well, today we've had a big accident, it's one of the biggest ever in Canada."

Canadian Prime Minister Stephen Harper, who has been pushing the Obama administration to approve the controversial Keystone XL oil pipeline, has said railroad transit is more "environmentally challenging" than pipelines.

The train's oil was being transported from North Dakota's Bakken oil region to a refinery in New Brunswick on Canada's East Coast. Because of limited pipeline capacity in the Bakken region and in Canada, oil producers are increasingly using railroads to transport oil to refineries.

The Canadian Railway Association recently estimated that as many as 140,000 carloads of crude oil will be shipped on Canada's tracks this year - up from 500 carloads in 2009. The Quebec disaster is the fourth freight train accident in Canada under investigation involving crude oil shipments since the beginning of the year.

Wayde Schafer, a North Dakota spokesman for the Sierra Club, has predicted such a catastrophe ever since crude began leaving the North Dakota by rail in 2008.

"I think anybody could have foreseen this," said Schafer. "It seemed like a disaster waiting to happen and it happened."

The fires sparked by the exploding tanks burned for two days, impeding investigators from reaching some of the "hot spots," including the area near the destroyed Musi-Cafe.

"It's a zone that we've started to work on and we'll work on it more in the hours to come," Richard said.

The area remained part of a criminal investigation and investigators were exploring all options, including the possibility that someone intentionally tampered with the train, Richard said.

Canadian Transport Minister Denis Lebel said the train was inspected the day before the accident in Montreal and no deficiencies were found. Lebel defended his government against criticisms it had cut back on rail safety measures. He said the rail remains a safe way to transport goods the vast majority of the time.

The moments leading up to the crash are still hazy. Local fire chief Denis Lauzon said firefighters in a nearby community were called to a locomotive blaze on the same train a few hours before the derailment, as it made its way uphill. Lauzon said he could not provide additional details about that fire since it was in another jurisdiction.

"We know that one of our employees from our engineering department showed up at the same time to assist the fire department. Exactly what they did is being investigated so the engineer wasn't the last man to touch that train, we know that, but we're not sure what happened," McGonigle said.

Earlier Monday, Queen Elizabeth II expressed deep sadness over the disaster, saying in a message through the federal government that the loss of life "has shocked us all." Canadian Prime Minister Harper toured the town Sunday and compared it to a war zone.

Quebec's Environment Ministry Spokesman Eric Cardinal said officials remained hopeful they could contain more than 85 per cent of the spill.