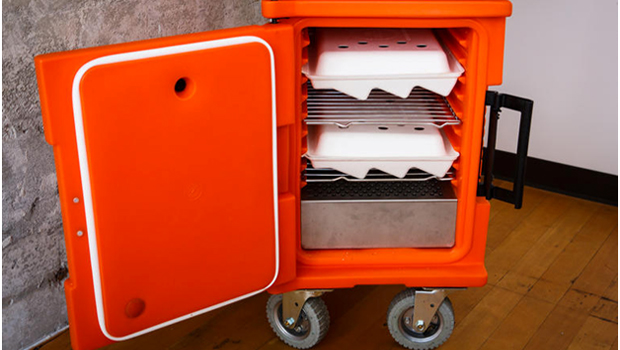 SAN FRANCISCO -- Taking a bite of the grilled cheese sandwich, the aged cheddar filling my mouth, and the artisan white bread crunching just as it should, it's clear technology helped make this lunch better than it could have ever been before.

I'm sitting in the corporate offices of The Melt, the would-be grilled cheese empire started by former Flip Camera founder Jonathan Kaplan. After biting into a Classic, I would have told you it was made just minutes earlier. Actually, it had come off the grill 35 minutes before, its still scrumptious state possible because of The Melt's brand-new patented Smart Box.

For some time, The Melt had been eager to expand into catering, because in the casual-restaurant industry, 10 percent to 35 percent of business can come from delivery. "That's a huge number we were not capturing," Hernandez said. "And as you drive catering, you expose yourself to new customers. There's a 90-day lag, and then a boost."

For The Melt, which currently has 15 locations scattered around California, finding ways to grow its business is key. As a private company, it would not reveal its financials, but in a statement to CNET, Vice President of Marketing Kelli Martin said, "The Melt has an accelerated growth plan focused on launching several more California-based locations and launching in a new market outside of California in" the first quarter of 2015. "Catering [fits] perfectly into this growth plan to deliver grilled cheese happiness to more people."

Befitting a company with roots in technology, The Melt's Smart Box brings algorithms to the table. As the company set out to find a way to deliver what it considered satisfactory sandwiches, it found the best boxes currently available worked for only about seven minutes. After that, the bread would get soggy and the cheese would get cold. Nothing else on the market could solve the problem, Hernandez explained.

That was both "terrible" news and good news, he said. Faced with an inability to simply buy what they needed, The Melt decided to invent a solution. The challenge, of course, was finding a way to create air flow in a box, yet not allow too much moisture to build up.

In a first proof of concept, The Melt's "Tiger Team" came up with a cardboard box with holes and a built-in hair-dryer, for air circulation. With sandwiches suspended inside on bamboo skewers, this approach worked for about 20 minutes -- but of course no one would buy a grilled cheese sandwich that came from inside such a box.

But that prototype was important, Hernandez recalled, because it established that air circulation was the key to a quality grilled cheese sandwich. After several other iterations, the company arrived at version 4, the current model, and at least 30 minutes, and as much as an hour's-worth, of post-grill goodness for up to 18 sandwiches.

At the bottom of the box, there's an aluminum heat mass. Plugged into an electrical outlet, the mass heats to 210 degrees Fahrenheit, at which point the box can go mobile. A small light turns from red to green, letting the store manager know it's time to go.

Also inside the box is a fan, which blows air over the heat mass, over several holes so that there's constant circulation inside. Sensors placed on the interior of the box measure heat -- so that if the temperature drops too low, it's clear it's time to plug back into an outlet -- as well as humidity. A second fan automatically engages if the humidity gets too high, sucking out moisture. All of this is run by a microcontroller, and The Melt's algorithm, which aims to keep the sandwich tasting as if it had just come off the grill.

As for the sandwiches themselves, they're held in a compostable box that keeps them raised off a flat surface, and that has holes in it to allow air circulation. Though the system seemed to be able to maintain that quality for up to an hour, Hernandez said The Melt decided 30 minutes was the maximum time allowable for delivery.

Although The Melt currently focuses on selling grilled cheese sandwiches, Hernandez said the Smart Box could work just as well for other hot foods like pizza, hamburgers, and even french fries. One thought is that the company may decide at some point to sell or license its box technology to other restaurants. Or, it's possible that it may branch out from grilled cheese, though Hernandez wouldn't confirm the latter idea.

For now, the company will be rolling out 10 of the boxes in San Francisco. But Hernandez said The Melt is working on producing between 10 and 20 more so that it can start delivering from its other locations.

Will it work? It's hard to say, of course. But in downtown San Francisco, there's already a trend of sandwich sellers rolling delivery carts around -- at room temperature. The Melt obviously thinks it can step up the game. Thanks to the industry's experience with the business boost that comes from catering, Hernandez said, the boxes "can pay for themselves in six months."

This article originally appeared on CNET as Quality grilled cheese delivered, thanks to algorithms