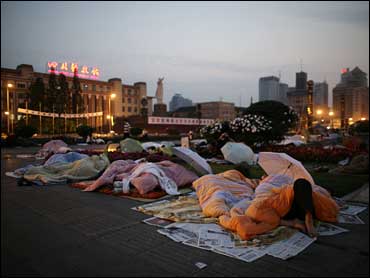 A woman who survived by drinking rainwater was rescued alive Tuesday after being trapped in the rubble of China's earthquake for more than 195 hours, news reports said, while the death toll in the disaster rose to more than 40,000.

The 60-year-old suffered only a hip fracture and facial bruises during her eight-day ordeal, which began after a landslide swept away a temple in the city of Pengzhou, Hong Kong-based Phoenix Satellite Television reported, citing air force officer Xie Ling Long.

The woman was initially free to move, but a later aftershock trapped her between two large stones, according to the report.

The official Xinhua news agency identified her as Wang Youqun, a retiree, and said she had been unconscious for a day when a falling girder hit her head in the May 12 quake.

The tale of survival came after the confirmed death toll from the disaster rose to 40,075, according to the State Council, China's Cabinet. Officials have said the final number killed by the quake was expected to surpass 50,000.

The government was setting up temporary housing for victims unable to find shelter with relatives, but there was a "desperate need for tents" to accommodate them, she said.

Nearly 280,000 tents have been shipped to the area and 700,000 more ordered, with factories working triple shifts to meet demand.

"Despite generous donations, the disaster is so great that victims still face a challenge in finding living accommodations," Jiang said.

China has said it will accept foreign medical teams, as the relief efforts shift from searching for survivors to caring for the homeless. A growing number of countries responded to the call, dispatching doctors to the quake area Tuesday.

Crews of doctors were also en route from Germany and Italy, Qin said.

At the West China Hospital in Chengdu, staff were trying to find relatives of victims being treated. A relief tent in the courtyard doubled as a bulletin board displaying about 50 snapshots of people who had not been claimed by families, mostly elderly patients or children.

Liu Yuanzhong said his son lost both legs when his office building collapsed in the town of Hanwang. The 38-year-old man, Liu Rui, was a manager at a coal mining company and was attending a weekly meeting about safety issues when the tremor struck, his father said.

Nearer the epicenter in the town of An Xian, a crew of volunteers arrived from Tangshan, the Chinese city that suffered the country's worst quake in 1976 that killed at least 240,000 people.

"Now it's time for us to help the others that are suffering," said Song Zhixian, a farmer among a group of 15 older men wearing red hard hats and vests. "It is part of the Chinese virtue and spirit: when one place suffers, then everyone else helps."

Flags in the country remained at half-staff and entertainment events canceled on the second day of a three-day national mourning period declared by the Chinese government, an unprecedented gesture normally reserved for dead state leaders.

During the mourning period, flags were flying at half-staff and entertainment events have been canceled. CBS News reporter Celia Hatton said the Olympic torch relay has also been suspended.

Thousands of quake survivors awoke Tuesday after spending a night sleeping in cars and in the open, frightened by government warnings of a potential strong aftershock. The alarm compounded uneasiness in the region, which has been rumbled by dozens of aftershocks since the quake.

Elsewhere, a panda from the Wolong Nature Preserve that disappeared during the quake returned safely, but two of the endangered animals were still missing, Xinhua reported. The others were "very likely to be alive," forestry official Xiong Beirong told the agency, because they were adults.

The quake killed five staff members at the reserve and destroyed or damaged all of its 32 panda houses. The local government has sent emergency supplies of bamboo, apples and veterinary medicine for the pandas, along with food and tents for staff.

Only two have not been recovered, although authorities have located them and restricted access to nearby areas, Zhou was cited as saying. They were expected to be transported to safety soon. The rest have been disposed of.

The Chinese government has previously said all nuclear facilities affected by the earthquake were safe and under control, but did not give any details.

A French nuclear expert said the radioactive sources likely came from materials used in hospitals, factories or in research, not for weapons.

"It doesn't shock me that there would be radioactive items found," particularly hospital equipment, said Thierry Charles, director of plant safety at the French Institute for Radiological Protection and Nuclear Safety, has seen reports from the Chinese nuclear safety agency.

An unknown number of hospitals were damaged or destroyed in the earthquake. The Sichuan province health department listed 489 major hospitals in areas that were hardest hit.