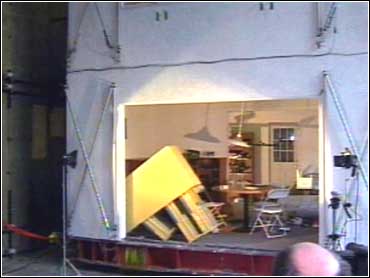 Before the earthquake hit, it was just a simple wooden house. Now it’s the epicenter for earthquake research.

It’s a house built by scientists at the University of California, San Diego, designed to help determine how wood-frame buildings can be improved to better withstand earthquakes.

The house was rigged with six cameras and 300 sensors to record every shake and shudder.

CBS News Correspondent Teri Okita reports when tested, the walls of the house did not come down. But they did provide the much-anticipated scientific research structural engineers were hoping for.

The researchers simulated a 6.7 earthquake equivalent to the deadly quake at Northridge, Calif. in 1994. Dishes slid off the dining table and wine glasses crashed to the floor. File drawers flew out and toppled the cabinet. Upstairs, a speaker smashed a teddy bear at the head of a child's bed.

“When you multiply the damage that you see here by hundreds of thousands and millions of houses, it would be billions of dollars worth of damage in an earthquake,” says project co-manager, John Hall. “That’s what we’re really trying to control is the damage.”

Engineers are hoping the data will be used to improve building codes, train architects and contractors and adjust insurance ratings and loss estimates more accurately.

More than 90 percent of the homes and many schools, businesses and shops in California, and even across the country, have wood-frame construction, like the test house. Engineers say it held up well in the study.

“This test program to my knowledge is certainly the most comprehensive one done in the U.S.,” according to project co-manager Andre Filiatrault. “It’s real full-scale… a real earthquake in real time.”

It also provided a rare look at the dangers of falling items during a tremor and shows how important it is to “quake-proof” your house so you’re prepared for the big one, if and when it hits.

The two-story, 600 square-foot test house was built inside a UCSD laboratory that holds what is called a shake table. The 4.8-ton platform simulated the horizontal motion felt during the Northridge quake, a disaster that killed 72 people and caused billions of dollars in property damage.

The structure was set up as if it was near the epicenter of an earthquake. The researchers used a hydraulic system and the sensors to help them analyze the data.

"Structurally, it performed very well. The damage appears to be minimal," Filiatrault said. "The test showed clearly the energy and power of an earthquake in a very short time."

Engineers for the project, funded by a $5.2 million grant from the Federal Emergency Management Agency, said they were particularly impressed with the house's stucco exterior and how it fortified the building.