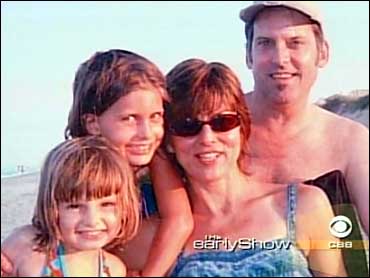 An entire family was found brutally murdered in their Richmond, Va. home on New Year's Day and many in the close knit community want to know why a well-liked couple and their two young children are gone.

Kathryn Harvey was the homecoming queen at her Virginia Beach high school, while her husband Bryan Harvey was a talented musician on the verge of stardom in the 90's with his band "House of Freaks."

According to Richmond police, Kathryn and Bryan and their two children, Stella and Ruby, were found bound with their throats cut in the basement of their suburban home. Firefighters discovered the bodies after responding to a fire call.

Neighbors, like Steve Tarrant, are struggling to believe such a warm and friendly couple could be massacred in their midst. "It's taken a toll on everybody, these were our good friends, these were our neighbors," Tarrant says.

The family may have been held hostage, since their daughter returned home just hours before the bodies were discovered New Year's Day morning. Apparently Kathryn Harvey answered the door, anxious and in distress.

Police Chief Rodney Moore has not named any suspects in the case.

On Friday's The Early Show, Betty Garrett, a friend and neighbor of the Harveys, and Susie Corbett, the director of the child care center Ruby had been attending, talked about the case with co-anchor Harry Smith.

What has been the reaction to the murders in Richmond?

"Of course, all of us are very, very upset and saddened by this tragedy. But we are all embracing one another and trying to help each other get through this," Garrett said.

Susie Corbett remembered the first time she met Bryan Harvey and his daughter Stella. "Well, I first met Bryan when he came to bring Stella to our program. He was a very conscientious dad. It was fun to watch him sit in the little seats that the preschoolers sit in order to help Stella get used to being in the program. And he spent several days before she ever started the program. And then when it was time to actually let her go, Bryan had a harder time than Stella did. She was ready to play."

How is the community coping?

"We are all trying to cope with it in our own way," Garrett said, adding that everybody is in shock.

Corbett said she feels horror and grief thinking about the crime but has vivid memories of Ruby and her parents. "I just can't keep forget, I just – all I can see is Ruby, when I last saw her before Christmas, in her little ruby red slippers with glitter all over them. We called her Ruby Red. She was just an astonishing little girl. And the parents were just the best parents. So creative. Helped us with any kind of project we had at the store. Brought stuff in to us."

Did anyone think the Harveys might have had any enemies?

"You would never imagine this family to have any enemies," Corbett said. "The children were the sweetest two little girls. Bryan and Kathryn were the ideal parents to have as parents in your program. If there was ever any volunteer needs, I only needed to put it out and Kathryn or Bryan were there to help out in the program."