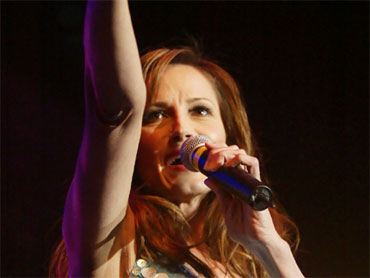 Police stepped up patrols around foreign consulates and government offices in this volatile city on Monday, fearing a backlash after Pakistani forces killed a suspected top al Qaeda operative wanted for his alleged role in the 2002 kidnapping and beheading of Wall Street Journal reporter Daniel Pearl.

Amjad Hussain Farooqi, also accused in two attempts on the life of President Gen. Pervez Musharraf in December 2003, died in a four-hour shootout Sunday at a house in the southern town of Nawabshah. Two or three other men, one of them an Islamic cleric, were arrested. Like Farooqi, they are all Pakistanis.

"He was a very important, most-wanted man in Pakistan," Information Minister Sheikh Rashid Ahmed told the BBC. "All the terrorist activities were moving around him, so we were looking, our agencies and our security people were looking for him for very long."

Authorities hailed the operation as a breakthrough and on Monday the investigation expanded to include the arrest of three other suspected Islamic militants, all brothers, in Sukkur, a town not far from Nawabshah. One was identified as Khalid Ansari, alleged to have ties to the Sunni Muslim group Jaish-e-Mohammed.

Police said the men were blindfolded and led away by intelligence officials as security forces using loudspeakers warned residents to stay indoors.

"After the investigation maybe we will have good information and we can move more fast," said Ahmed.

Fayyaz Leghari, deputy chief of police in Karachi, a hotbed for Islamic militants, said the city was on "red alert." As well as stepping up patrols around foreign consulates and key government offices, police posted more plainclothes officers at sensitive locations.

Pakistan is a key U.S. ally in the war against terrorism and has arrested more than 600 al Qaeda suspects, including several senior figures in the terror network. Many have been handed over to U.S. authorities.

In Washington, a U.S. official who described Farooqi as a key al Qaeda figure said the government could not yet confirm he had been killed but that appeared to be the case. Pakistani officials said they were awaiting the results of DNA tests but had little doubt the body was that of Farooqi.

Farooqi was believed to have been an associate of Khalid Shaikh Mohammed, the reputed al Qaeda No. 3 captured in Pakistan last year. He had been missing since Pearl was abducted in Karachi in January 2002.

Pearl's captors beheaded the journalist and released a videotape of the killing. Four Islamic militants have been convicted of his kidnapping but seven other suspects — including those who allegedly slit his throat — remain at large.

Farooqi, thought to be 32, was born in a village in eastern Punjab province. His family says he was radicalized by a visit to Kashmir, where he trained with Islamic militants fighting against Indian security forces. He later visited Taliban-ruled Afghanistan.

In May, security officials identified him as an organizer, with Libyan al Qaeda suspect Abu Faraj al-Libbi, of two attempts to assassinate Musharraf last December by blowing up his motorcade in Rawalpindi, a city near the capital, Islamabad. Musharraf, who has enraged Islamic militants with his support for Washington's campaign against terrorism, escaped injury both times but several other people were killed. Al-Libbi remains at large.

Farooqi is also suspected of taking part in the hijacking of an Indian airliner to Kandahar, Afghanistan, in 1999 that resulted in a hostages-for-prisoners exchange that freed British-born militant Ahmed Omar Saeed Sheikh from an Indian prison. Sheikh has been sentenced to death for his role in setting up the Pearl abduction.

Dozens of police and paramilitary rangers blocked access Monday to the scene of Sunday's four-hour raid in Nawabshah, 125 miles northeast of the main southern city of Karachi. Authorities said they acted on a tip that Farooqi was hiding there. A paramilitary official said that at one point Farooqi shouted he preferred death to capture.

Officials have yet to disclose the identities of those arrested. But an intelligence official in Nawabshah, 125 miles northeast of Karachi, said one was Abdul Rehman, a teacher at a local Islamic seminary who had rented the house for Farooqi two months ago.

Another intelligence official, also speaking on condition of anonymity, said a second suspect as Yaqoob Farooqi. It was unclear if he was related to the dead suspect.

Authorities seized a computer, CDs, militant literature, some grenades, a wire cutter and several photos from the house, the source said.

"He is the same man whose pictures we saw today in the newspapers. I have seen him going and coming on his bicycle," he said.

Pakistan says it has arrested at least 70 terror suspects since mid-July, including Mohammed Naeem Noor Khan, an alleged al Qaeda computer expert, and Ahmed Khalfan Ghailani, a Tanzanian suspect in the 1998 bombings of U.S. embassies in east Africa that killed more than 200 people.