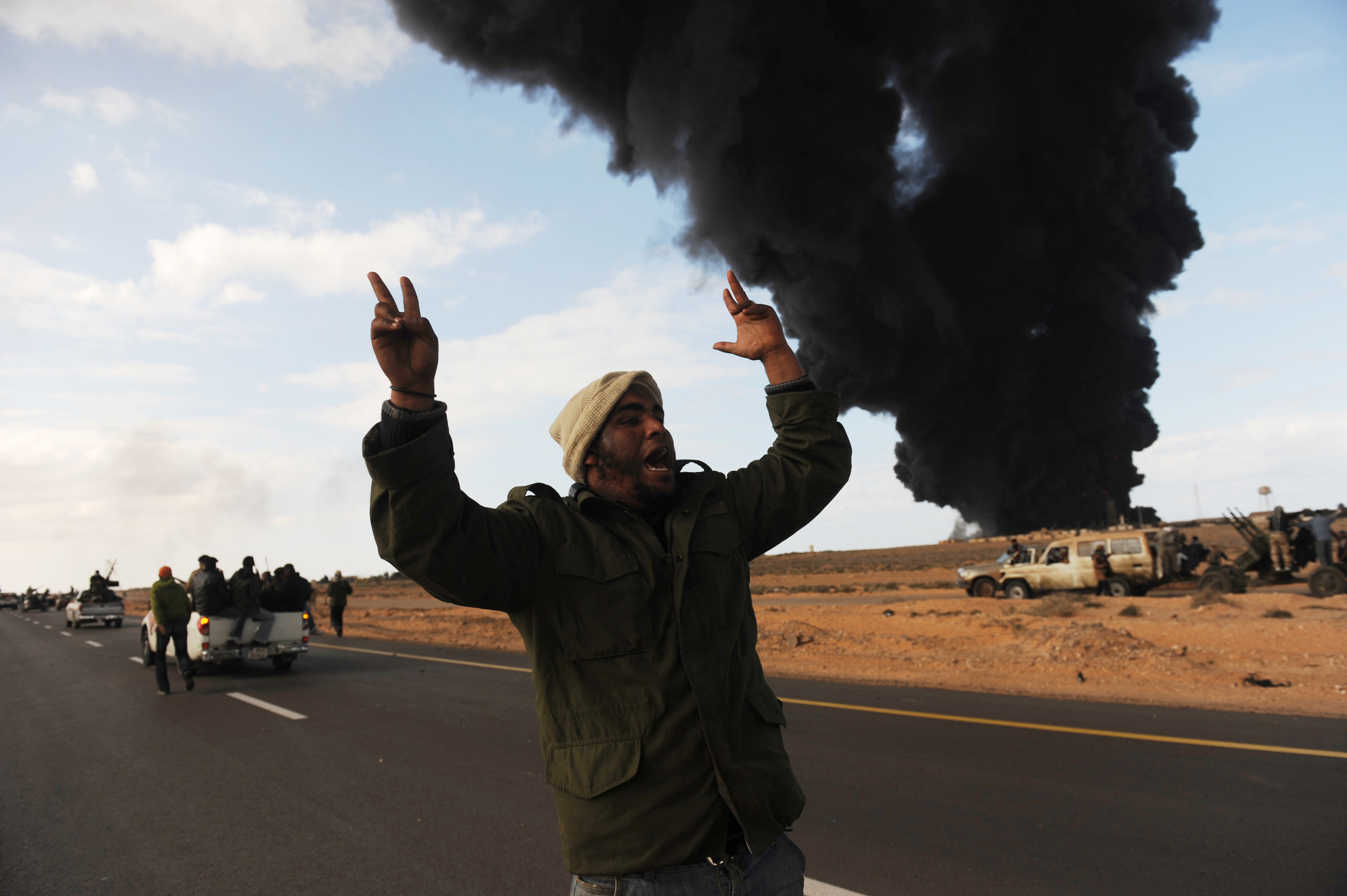 RAS LANOUF, Libya - Forces loyal to Muammar Qaddafi struck an oil pipeline and oil storage facility Wednesday, sending a giant yellow fireball into the sky as they pounded rebels with artillery and gunfire in at least two major cities.

Qaddafi himself took to state television Wednesday to offer a $400,000 bounty on the head of alleged opposition leader Mustafa Abdul Jalil, according to a Los Angeles Times report. During the speech, Qaddafi also derided the opposition as "traitors," and again blamed foreigners and Al Qaeda for perpetrating the unrest roiling the North African state he has ruled for more than four decades.

Qaddafi appeared to be keeping up the momentum he has seized in recent days in his fight against rebels trying to move on the capital, Tripoli, from territory they hold in eastern Libya. State television claimed Qaddafi's forces had retaken Zawiya, the city closest to Tripoli that had fallen into opposition hands.

There was no way to immediately verify the claim. Qaddafi forces have been waging a heavy siege on the city since last week, and phone lines there have not been working for days. State TV showed a crowd of hundreds, purportedly in Zawiya's main square on Wednesday, carrying images of Qaddafi and shouting "The people want Colonel Qaddafi!"

The fall of Zawiya to anti-Qaddafi residents early on in the uprising that began Feb. 15 had illustrated the initial, blazing progress of the opposition, which has now been blunted.

In the east, an Associated Press reporter at Ras Lanouf near the front line of fighting saw an explosion from the area of the Sidr oil facility, 360 miles east of Tripoli. Three columns of thick smoke rose from the area, apparently from burning oil.

Mustafa Gheriani, an opposition spokesman, said the government artillery hit a pipeline supplying Sidr from oil fields in the desert. An oil storage depot also was hit, apparently by an airstrike, he said.

Qaddafi's successes have left Western powers struggling to come up with a plan to support the rebels without becoming ensnared in the complex and fast-moving conflict. On Wednesday, a high-ranking member of the Libyan military flew to Cairo with a message for Egyptian army officials from Qaddafi, but no further details were known.

Greece's foreign ministry says a Libyan envoy will hold talks in Athens Thursday with Deputy Foreign Minister Dimitris Dollis. A ministry statement says Mohamed Tahir Siala's visit was arranged in agreement with European Union foreign policy chief Catherine Ashton. It comes ahead of a meeting of EU foreign ministers on Thursday to discuss the situation in Libya, the statement said. No further details of the meeting were provided. Greece has traditionally good ties with Libya and its leader Muammar Qaddafi.

President Barack Obama's most senior advisers were meeting Wednesday to outline what steps are realistic and possible to pressure Qaddafi to halt the violence and give up power.

They planned to examine the ramifications of a no-fly zone over Libya and other potential military options, U.S. officials said, speaking on condition of anonymity to discuss internal administration deliberations.

In an exclusive interview with CBS News, Secretary of State Hillary Clinton told "The Early Show" co-anchor Erica Hill, "We believe it's important that this not be an American, or a NATO, or a European effort. It needs to be an international one."

"We don't want there to be any room for anyone, including Col. Qaddafi, to say that 'This isn't about my people, this is about outsiders,'" Clinton said, "because that would be doing a grave disservice to the sacrifice of the people in Libya."

Britain and France are pushing for the U.N. to create a no-fly zone over the country, and while the U.S. may be persuaded to sign on, such a move is unlikely to win the backing of veto-wielding Security Council members Russia and China, which traditionally object to such steps as infringements on national sovereignty.

The two sides in Libya traded barrages of artillery shells and rockets Wednesday afternoon about 12 miles west of the oil port of Ras Lanouf, an indication that regime forces were much closer than previously known to that city. Ras Lanouf is the westernmost point seized by rebels moving along the country's main highway on the Mediterranean coast.

Four bodies were brought to the morgue at the hospital in Ras Lanouf, doctors said.

Warplanes streaked overhead and a yellow fireball erupted at or near the location of a small oil terminal. Pillars of black smoke also rose from the direction of the town of Bin Jawwad, about 40 miles to the west.

Qaddafi said in a Turkish television interview that Libyans would fight back if Western nations imposed a no-fly zone to prevent his regime from using its air force to bomb government opponents staging a rebellion.

He said imposing the restrictions would prove the West's real intention was to seize his country's oil wealth.

Qaddafi spoke with Turkey's state-run TRT Turk television late Tuesday after a surprise appearance at a hotel where foreign journalists are staying in Tripoli.

In separate remarks, he called on Libyans in the rebel-held east of the country to take back control from the opposition leaders who have seized the territory.

Forces loyal to the Libyan leader have been fighting rebels in the east as well as in a handful of towns close to the capital Tripoli, where he has total control.

In the interview, Qaddafi was responding to U.S. and British plans for action against his regime, including imposing a no-fly zone to prevent Qaddafi's warplanes from striking rebels.

Qaddafi claimed such a move would lead Libyans to understand that the foreigners' aim was to seize oil and take their freedom away. If that happened, he said, he "Libyans will take up arms and fight."

Libyan state television also broadcast remarks by Qaddafi addressing a group of youths from the town of Zintan, 75 miles (120 kilometers) southwest of Tripoli. Qaddafi again blamed al Qaeda operatives from Egypt, Algeria, Afghanistan and the Palestinian territories for the turmoil roiling his country since Feb. 15.

State television broadcast Qaddafi's address early on Wednesday, but did not say when the Libyan leader had spoken.

Qaddafi has been in power since 1969, when he led a military coup that topple the monarchy.

In the TRT Turk interview, Qaddafi said there were no legitimate grounds for a foreign intervention in his country, insisting that Libya was only fighting al Qaeda as in Afghanistan or Pakistan.

"If al Qaeda seizes Libya, that will amount to a huge disaster," Qaddafi said. "If they (al Qaeda fighters) take this place over, the whole region, including Israel, will be dragged into chaos. Then, (al Qaeda leader Osama) Bin Laden may seize all of north Africa that faces Europe."

The violence in Libya has taken a toll on the country's oil production. For the past week, government forces and rebels have been battling around several key oil ports east — Brega, Ras Lanouf and Sidr. At their peak, those three export terminals handled about 715,000 barrels of crude per day, or roughly 45 percent of the country's exports, according to figures published in industry publication Africa Energy. A fourth eastern port, Marsa al-Harigah, handled another 220,000 barrels per day.

In total, those four ports would then account for almost 60 percent of the country's crude exports.

"We were already seeing Libya as pretty much being closed," said Samuel Cizsuk, Mideast oil analyst with IHS Global Insight in London. "It was only a question of time before the escalating violence would damage oil facilities."

"Libya has been discounted from the global markets," he said.