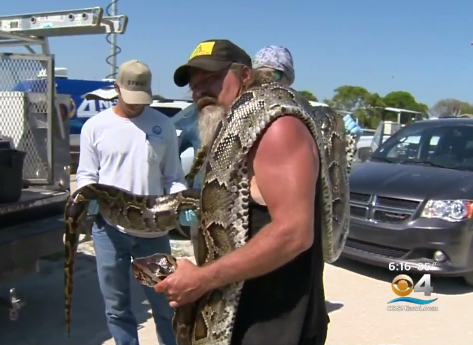 HOMESTEAD, Fla. -- It's a big one -- in fact, the biggest caught during the current python eradication project conducted by the South Florida Water Management District, CBS Miami reports.

It wasn't an easy task for Dusty "The Wildman" Crum, an orchid grower by day and a champion python hunter in his spare time.

"It is like Andre the Giant versus Hulk Hogan, WrestleMania," he said, with the python draped over his shoulder.

The snake's capture means that dozens of other snakes will not exist; 78 eggs were taken out of the python, which was 16 feet, 10 inches long and was captured in the Florida Everglades.

"Biggest snake I ever caught in my life right here," said Crum.

It made for a good payday. The South Florida Water Management District pays hunters like Crum $8.10 an hour, with additional incentives: $50 for a 4-foot-long snake and $25 for each additional foot. An 8-foot python, for example, would pay out $150.

Crum's massive python netted him $375 from the water district -- and about the same for selling the skin.

The snake was the biggest caught during this round of snake hunting.

But it's not the biggest ever. The local record was a snake measuring 18 feet, two inches, and weighing 160 pounds. Crum's snake weighed 130.

There are thousands upon thousands of pythons in the Everglades, wiping out wildlife. You don't see many raccoons or birds. They even take on gators.

"We're making a difference by taking eggs out of the ecosystem," Crum said.