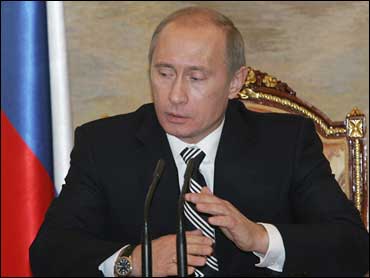 Foreign observers and Russian opposition groups accused authorities Monday of manipulating a sweeping election victory for the party of President Vladimir Putin, who hailed the results as a validation of his leadership.

With ballots from nearly 98 percent of precincts counted, Putin's United Russia party was leading with 64.1 percent of the vote, the Central Election Commission said - giving it 70 percent of the seats in parliament.

The Communists trailed with just 11.6 percent of the vote, with Kremlin-allied parties claiming the rest of Sunday's vote.

The Communists, Liberals and foreign observers criticized the vote as unfair. Opposition leader Garry Kasparov, the ex-chess champion, denounced the election as "the most unfair and dirtiest in the whole history of modern Russia."

But Putin and his allies praised the result as an overwhelming endorsement of his leadership and policies.

"Of course it's a sign of trust," Putin said in televised remarks. "Russians will never allow the nation to take a destructive path, as happened in some other ex-Soviet nations."

The election followed a tense Kremlin campaign that relied in part on persuasion and intimidation to ensure a rout for United Russia and the president, who has used Russia's energy riches in an effort to restore Moscow's influence on the global stage.

Putin is expected to claim the victory gives him the mandate to remain Russia's de facto leader even after he steps down as president in May, as required by the constitution.

It was "not a fair election," said Goran Lennmarker, president of the Parliamentary Assembly of the Organization for Security and Cooperation in Europe.

The election monitoring arm of the OSCE - regarded in the West as the most authoritative election monitor - did not send observers, saying Russia delayed granting visas for so long that the organization would have been unable to meaningfully assess election preparations.

Luc van den Brande, head of a delegation from the Parliamentary Assembly of the Council of Europe, said Russian authorities exerted the "overwhelming influence of the president's office and the president" on the campaign, skewing its outcome.

"In the run-up to election day, we expressed our concern regarding the use of state administrative resources in support of United Russia, the bias of the state-owned or -influenced media in favor of United Russia, intimidation of political opposition, and the lack of equal opportunity encountered by opposition candidates and parties," said Gordon Johndroe, spokesman for the U.S. National Security Council.

Kimmo Kiljunen, vice president of the OSCE's Parliamentary Assembly, called the elections "strange" and "problematic," citing reports of harassment of parties and confiscation of election materials.

"These elections, from my point of view, were done in a Russian way," he said. "I mean that there was the strange situation that the executive branch almost chose the legislative branch. It is supposed to be the other way round."

Kremlin spokesman Dmitry Peskov, however, called the vote free and fair. Russia is "a developing democracy that had a free and fair election," he told foreign journalists.

Turnout was about 63 percent, up from 56 percent in the 2003 parliamentary elections.

The Kremlin portrayed the election as a plebiscite on Putin's nearly eight years as president. Putin is widely popular, in part because of Russia's oil-fueled economic boom and his ambition to revive Russia's status as a great power.

United Russia said it will name its presidential candidate at its congress set for Dec. 17 - most likely a figurehead who stands to be overshadowed by Putin.

Putin is prohibited from running for a third consecutive term but clearly wants to remain in power even though he has ruled out changing the constitution to allow him to run for another term as president.

A movement has sprung up in recent weeks to urge him to become a "national leader," though it's not clear what that would mean.

United Russia's victory would give it 315 seats in Russia's 450-seat State Duma, election officials said. The Communists would have just over 50 seats.

Communist Party leader Gennady Zyuganov called the election "the most irresponsible and dirty" in the post-Soviet era and party officials vowed to challenge the results.

Two other pro-Kremlin parties - the nationalist Liberal Democratic Party and the populist Just Russia - also made it into parliament.

No other parties passed the 7 percent threshold for gaining seats in the legislature. Both opposition liberal parties, Yabloko and the Union of Right Forces, were shut out.

Anatoly Chubais, head of Russia's electricity monopoly and a leader of the Union of Right Forces, called the vote a "disgusting" repeat of Soviet practices.

"United Russia is becoming monopolist and restoring a Soviet spirit and Soviet mentality," he said in a statement.

Many voters said they were pressured to cast ballots for United Russia, and election monitoring watchdogs said voters reported that their ballots already were filled out for United Russia. In Chechnya, where turnout was over 99 percent, witnesses reported seeing election authorities filling out and casting ballots.

European election monitors criticized changes in Russian election law that restricts voters to choosing only for a party, not candidates, and for making it more difficult for smaller parties to make it into parliament.

In previous elections, half the seats were chosen among candidates contesting a specific district, allowing a few mavericks to get in.